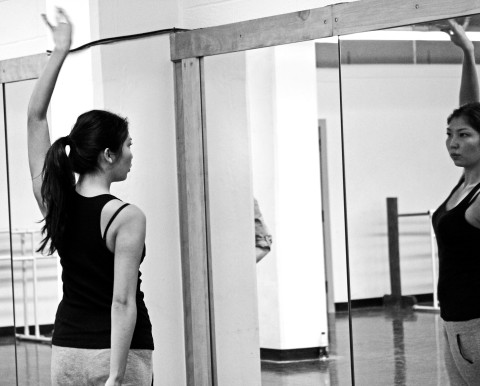 The bright glittery costumes, the kicks, lifts, and turns, the whirlwind of perfectly timed movements between well rehearsed partners as they confidently sweep across the floor. All these make up the allure that the UMass Ballroom Dance Team creates when they dance.

At 21 years old, the club has grown tremendously as the group holds auditions for new recruits each semester. Elizabeth Tripp, secretary for UMBDT, remembers the audition being “a little bit intimidating because there were so many people there and many women, not nearly as many men. So I felt like I had a lot of competition already at the try out.” At auditions as well as their social dances, there is always a high turnout, with, usually, two to three girls for every guy.

With 60 new recruits, this year’s auditions were the highest in newcomer acceptances ever. On the night of auditions, the Campus Center Auditorium filled with dancers of all skills and backgrounds. Some were nervously chatting in groups, while others sat on the floor stretching. Everyone seemed a little nervous.

“Being on the other side I try to be as helpful as I can, especially during the tryout process,” said Tripp. “You know, even just saying good luck or giving tips as they’re practicing beforehand, because I wish that someone had calmed me down just a slight bit.”

“It is a nerve wracking process because team members are walking around with a pencil and writing down numbers and you’re wondering what the heck they’re writing,” she added.

Once you make the team, you can learn the various dance steps.

The different dances also come with different outfits, each tailored to the type of dance. The dresses can vary from long and flowing to short and fringed.

“I remember walking into a Panera after a smooth/standard dance once at Brown’s competition, last year. A little girl and her mother came up to us because she thought we were princesses,” remarked Samantha Sexton, vice president of UMBDT.

“With Latin it’s a bit more – heeeeey!” said Tripp, who added that the guys, who are normally prim and proper, get to open their shirt by a couple buttons and women’s dresses are much higher, more revealing and usually brighter.

There are also different for all dancers. Those starting out are placed in “Newcomer”  category, for one semester. After that semester you automatically go on to Bronze level. After Bronze is Silver, then Gold, Open, Pre-Champ and Champ. By doing well in a competition, couples get points based on where they place, and based on their points they may move up in level.

“When I was a newcomer, my partner and I were the overall Latin and Standard Champions at Rhode Island College’s competition, which was unbelievable,” Tripp remembered. ” We also placed third overall in Smooth as well as Rhythm, we did really well.”

The higher you go in the levels, the more people you’re competing against who have been in that level longer and have been dancing longer. But the team remains competitive.

“We have people that place in almost every competition that we go to,” said Antonio Volpini.

Normally the UMass Ballroom Dance Team travels all over the Northeast/New England area to compete. They’ve attended competitions at Harvard, Brown, Yale, Holy Cross and MIT, among others. At competitions they have a large presence, as one of the largest ballroom teams in the New England area.

This year, for the first time ever, they are hosting their own competition at UMass Amherst. The competition, an all-day event on November 2, will be held in the Campus Center Auditorium.

“We have some exciting plans in the works,” said Samantha Sexton, “and, though I can’t reveal them yet, I think they’re fantastic!”

Antonio Volpini described the transformation of the team saying; “we’re entering another realm of competitive ballroom by hosting our own competition. There is a separation between teams that have competitions and teams that don’t. It’s a moniker of a good, strong, well founded team that’s well supported. We’re taking the team to the next level.”

For more information, contact the UMass Ballroom Dance Team on its Facebook page, or the president of the team at [email protected]

Vincenza Parella can be reached at [email protected]