The Stonewall Center: 29 years of advocacy and service to LGBTQIA students 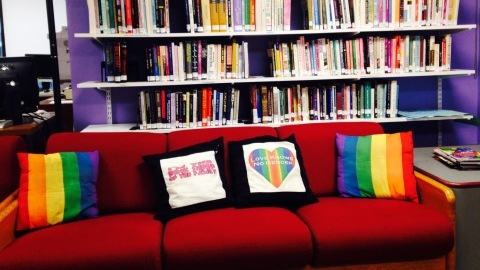 In 1985, University of Massachusetts Amherst became the third college campus in America to open an LGB (lesbian, gay, bisexual) center. The center originally opened as an office in the Student Affairs building and was created in response to anti-LGB related incidents. Ten years later, it was renamed The Stonewall Center, in tribute to the Stonewall riots of 1969, and relocated to its current home inside of the Crampton residence hall in Southwest.

Now, in its twenty-ninth year of operation, the efforts of the Stonewall Center have kept UMass Amherst among the top college and university leaders in pioneering support and advocacy for LGBT (lesbian, gay, bisexual, transgender) students. UMass has been recognized by Campus Pride as one of the most LGBT supportive schools for the fourth year in a row, accompanying the fifty-five other schools given a five star honor among the 425 schools listed on the organization’s database. Campus Pride is the leading national non-profit organization for student leaders and campus groups working to create a safer college environment for LGBT students. The honor they have bestowed upon UMass is telling of the positive effect the Stonewall Center has here.

UMass has also been featured on Buzzfeed’s “25 Best College/Universities for LGBT students.” A brief description of UMass included the bulletin boards that the Stonewall Center provides for resident assistants on “How to be an Ally”, “Same Sex Families” and “LGBT Trivia” which is said to be a “fierce feature” of the University.

The  Stonewall Center provides many resources such as ally trainings and workshops to the university, an alpha list of all allies who have gone through the training, a place to post incident reports, HIV and STD testing, gender and sexual orientation inclusive dances, coming out support groups, and a massive library of books, DVDs and video tapes in the center. The Stonewall Center also contains a weekly newsletter, called Queer-e, informing over 1,000 subscribers about upcoming LGBTQIA (lesbian, gay, bisexual, transgender, queer, intersex, asexual) events and activities.

The Speaker’s Bureau is another interesting component of the Stonewall Center. A couple dozen active members speak in New York, Vermont, Connecticut and Massachusetts to colleges, religious organizations, student groups, social service agencies and other groups. The unique aspect of the bureau is the personal experiences that the speakers are willing to share, telling their “stories” within the LGBTQIA community or their role as an ally. These students brave endeavors are done with the integrity to break the silence of the LGBTQIA community in society and correct the misinformation, stereotypes and myths that are perpetuated within it. The bureau last year completed more than fifty panels which break any pre-existing record.

The Stonewall Center also actively supports and educates residential life, administering the required ally training to all resident assistants, peer educators and to the gender free housing area and the Spectrum Floor. The Spectrum Floor,  a floor for the LGBTQIA community, is a defined residential community in the Baker residence hall in Central and historically known as the first one of its kind, after its establishment in 1992.

More recently, the Stonewall Center has worked alongside  student run organizations on campus such as the Pride Alliance, to cover the transitioning expenses for students, allowing them to change their names and gender on campus records, making gender inclusive bathrooms in all newly constructed buildings, and allowing trans students to participate on campus sports teams.

Despite these recent progressive steps taken by the university, Genny Beemyn, the director of the Stonewall Center, says, “We are in a very gender binary society and our institution reflects that in some ways.” In order to combat this and continue the success of the Stonewall Center, Beemyn and their staff are always trying to think of what else could be done and what can be done better. This also requires specific attention to how students within the LGBTQIA community are changing and responding effectively to their needs. In their eight years, serving as director, Beemyn has noticed that more and more students within the LGBTQIA community are identifying their genders as nonbinary and gender fluid as well as the increase in the population of trans students.

To accommodate these observations, Beemyn and the Stonewall Center are focused on developing a plan to encourage the university to make LGBTQIA identification and representation more of a priority. Ideally, Spire would provide students with the options of stating their preferred pronouns so friends and faculty know how to properly address them. As well, the university neglects to record any data on the LGBTQIA population enrolled. By providing an overall size of the community, the Stonewall Center could better accommodate them.

Beemyn is still very gracious of the administration they work with and always feels supported. They receive realistic and enthusiastic feedback from the administration and explain, “There never has to be the conversation of why we should be doing this. It is always how we can.”