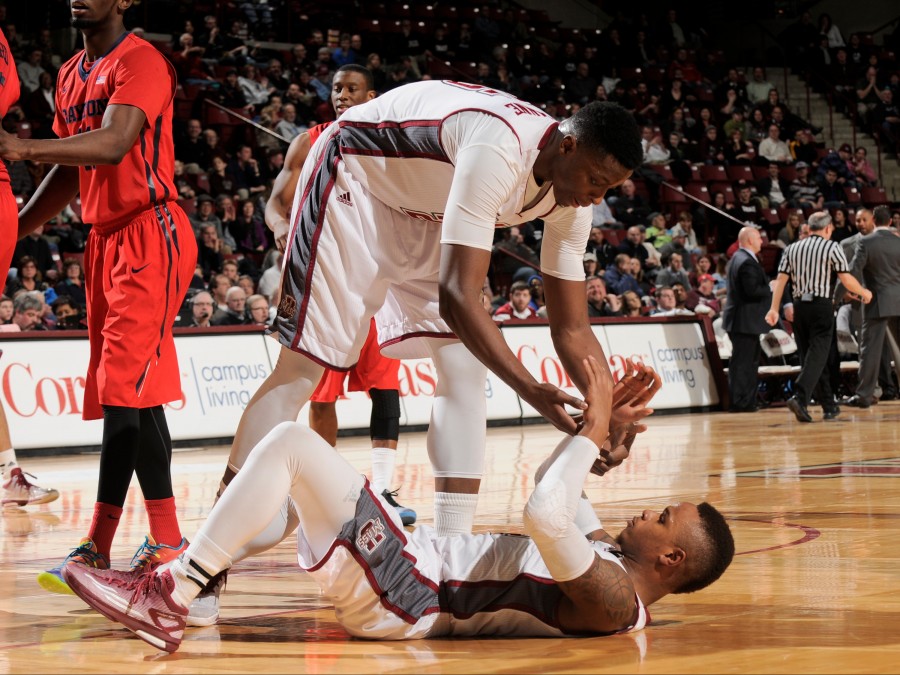 With just a few games remaining for the University of Massachusetts men’s basketball team, the Minutemen’s record stands at 17-12, good for a .586 winning percentage. For many, this season has been somewhat of a disappointment. Previously, UMass finished with over 20 wins every year over the past three seasons, and they’re on pace to win only 18 this season.

But even with this supposed underachievement,  the Minutemen have scored 2033 points, and given up – wait for it – 2036 points. Judging from their point total, their win percentage should be 50/50.

You don’t need advanced statistics to know that’s not good. By record, UMass places 125th out of 351 teams in the nation. But Ken Pomeroy’s advanced statistical ratings show that UMass’ true record, based on their performance, should be the 117th instead.

But why the discrepancy? What makes UMass better than what they’ve shown on the court? Let’s look at the strengths and weaknesses of the Minutemen through the numbers.

1. Getting to the Line

Those who follow the team closely know of Trey Davis’s 33 straight free throws. He’s not the only one hitting the easy shots; the team has attempted 24.6 and made 17.23 free throws a game, both figures in the top 50 schools in the nation. The team has done a great job getting to the line and getting the free points off the opponents’ fouls.

An often overlooked skill, the Minutemen have done a great job defending the three-point shot, allowing a 32 percent success rate as opposed to the national average of 34 percent.

UMass is one of the luckiest teams in the nation; Ken Pomeroy’s luck rating has them at 17th in the nation in terms of winn 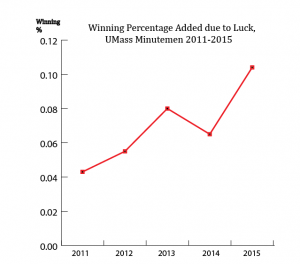 ing percentage added per game. This means that UMass is proficient at winning close games and having a lower rate of opponents’ free throw shots made. In fact, UMass has been one of the luckiest teams over the past five seasons:

Keep in mind the league average for this mark is 0. UMass has been consistently over that mark for the past five years. It’s easy to see where this comes from; UMass has won half of its 16 games with a margin of 6 points or less while losing many of its games in blowout fashion, including a 22 point loss to LSU, a 20 point loss to Providence and a 16 point loss to URI.

UMass is incredibly weak at three-point shooting. Their three-point shooting percentage is at 30.4 percent, 314th in the nation and much below the league average at 34.3 percent, according to Kenpom.com. The loss of guard Chaz Williams, who made over 30 percent of their 3-point shots at a 36 percent rate, has greatly compromised the Minutemen’s ability to shoot beyond the arc.

2. Get Blocked and Stolen Often

In basketball, you have to do all the little things right. But UMass has trouble getting their shots blocked and having their pockets picked. They are 253rd and 299th, respectively, in giving up blocks and steals per game. Per average, this only comes out to one block and one steal per game given up compared to the nation average. These add up over the course of the season, however.

Even if you get the little things right, you have to create and keep opportunities for your team to stay in the game. UMass gives up turnovers on 21 percent of its possessions while forcing them in 18 percent of its opponent’s possessions, both significantly worse than the league average of 19.4 percent. Giving the opponents an extra possession or two each time they step on the court is a significant disadvantage to the Minutemen.

All of these things considered, the stats listed still view UMass as an above-average team. Coach Kellogg has done a great job in utilizing his players; being the 100th best college basketball team in the nation is still an accomplishment. But the numbers don’t lie, and they show that the team has skills that need polishing. Let’s hope they shape up and make it to the NCAA Tournament before time runs out.

Kevin Kim can be reached at [email protected] and on Twitter at @StatisticalLens.