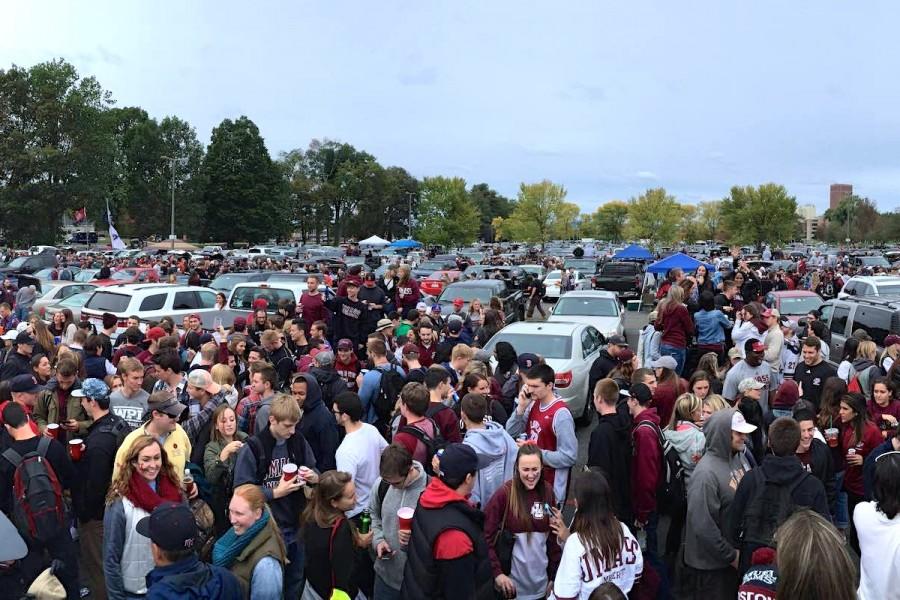 UMass tailgates cut down on the mess, not the fun

On Saturday, Oct. 3, students in raincoats and UMass gear flooded Lot 22, crowding into the open spaces between closely parked cars and trucks. They stood shoulder to shoulder, drinking from beer cans and red Solo cups, some searching for a space large enough to toss a football or set up Cornhole boards.

It was the first tailgate of the 2015 UMass football season, and the lot outside of McGuirk Stadium was once again the home of pre-game celebrations that so often overshadow the game itself.

On the outskirts of the sea of students, police officers and volunteers in neon green jackets observed, their eyes scanning the crowd for anything that could disrupt the fun, peaceful atmosphere. Every now and then, a golf cart parted the crowd, its drivers encouraging students to fill the giant garbage bins located in the back of the cart with trash and recyclables.

The UMass administration has had a long-running problem with handling the trash left behind after tailgates and other mass gatherings, an issue that has heated up over the past couple of years. Last year’s first tailgate of the year saw a lack of preparation, which led to an expensive cleanup that cost the university an estimated $28,000.

Not only was the event a financial problem, but it was also an environmental one.

The assortment of bottles, cans and other trash left behind had to be thrown into a landfill instead of being recycled. After seeing the damages, Eco-Rep co-manager Steven Amorin knew that changes needed to be made.

“Once we saw the aftermath of the homecoming tailgate and the feedback, addressing tailgates became a priority,” Amorin said.

After researching strategies implemented by other large universities, Amorin discovered the Game Day Challenge, which was created by the Environmental Protection Agency in 2009 and aims to reduce waste at college football games. Colleges compete in the challenge by submitting their recycling totals; the EPA then ranks the colleges by how much waste they save.

Amorin and the Eco-Rep program worked hard to promote the Game Day Challenge leading up to last year’s second tailgate for the game against Ball State. When the dust settled, 2,170 pounds of recyclables were collected.

Even with the relative success of UMass’ first entry in the Game Day Challenge, there was a high level of pressure heading into the 2015 season. If the tailgate was to resemble the one that kicked off last year’s season, students could face restrictions at future events.

In the half-hour leading up to the game’s three p.m. kickoff, police officers left their posts and directed students out of the parking lot. Students scattered in various directions, some up University Drive or Fearing Street, and others to the dining halls for a much-needed meal. With the last of the beers finished and the trucks’ tailgates slammed shut, all that remained was the mess, and, in comparison to tailgates of the past, it wasn’t much of a mess at all; the volunteers kept most of the trash from ever touching the pavement.

“The latest numbers we have had come in show that 6,230 pounds of recyclables were collected,” Amorin said.

The success of the tailgate can be attributed to many people, from the police on site to roughly 25 student volunteers — and the tailgaters themselves.

UMass is heading in the right direction when it comes to handling the mess created by tailgate celebrations. Recycling efforts have improved drastically, and, according to senior Christian Lynch, the university’s efforts haven’t restricted students’ fun.

“In the past, especially with Blarney Blowout, they seemed to want to kill the celebration early so nothing bad happens,” said Lynch. “I think we are showing that we can have fun without hurting anything,” he continued.

For Amorin, making the Game Day Challenge part of the fun is vital as he looks forward to future tailgates, the next of which is this Saturday, Oct. 17.

“We want to bring that competitive spirit to the tailgates and at the same time be doing the right thing,” explained Amorin.

Sam Holzman can be reached at [email protected] or on Twitter @holzy9.