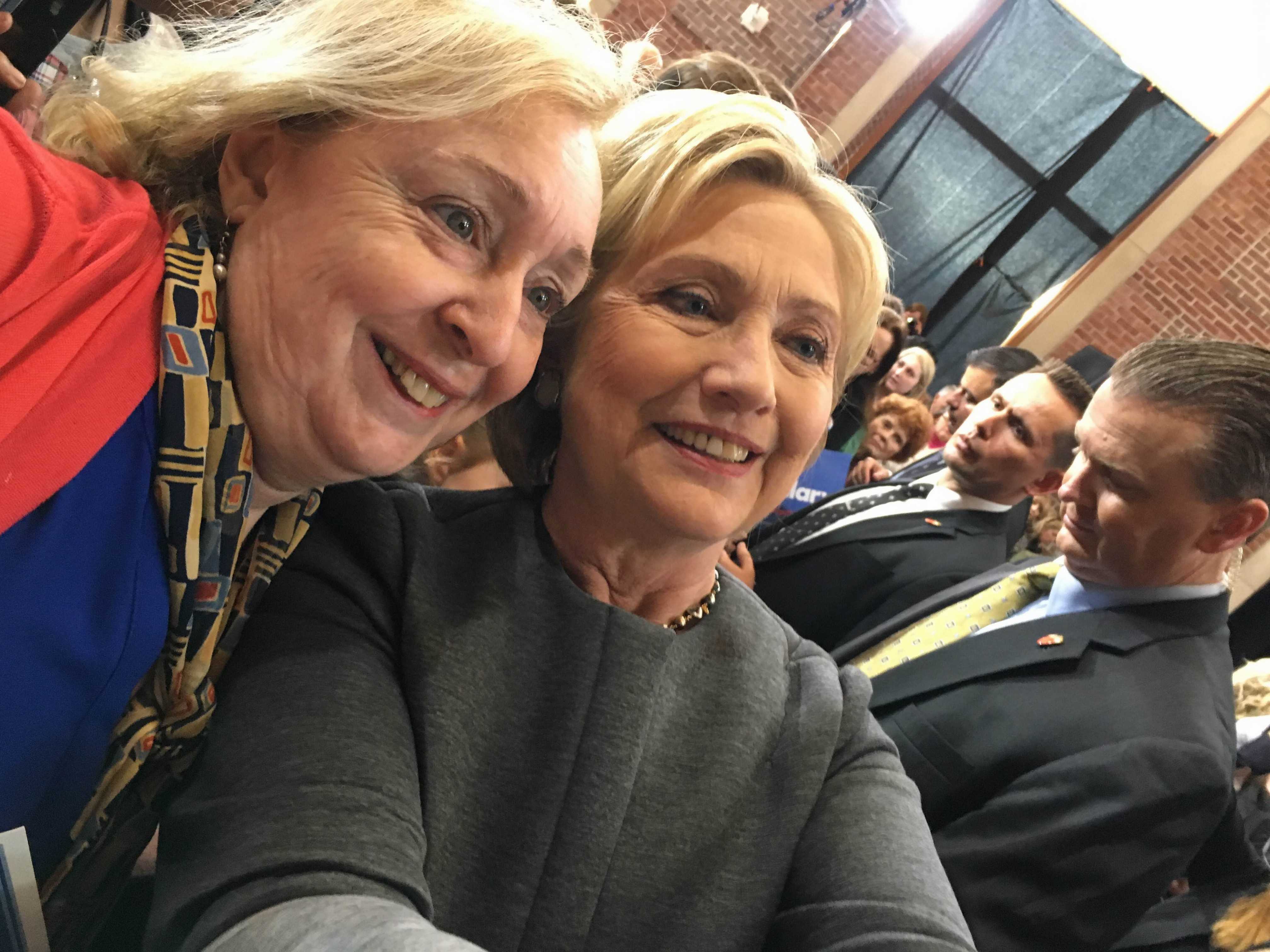 Hillary Clinton brought her presidential campaign to the Pioneer Valley on Monday, Feb. 29, drawing a crowd big enough to fill the Wood Museum of Springfield History to capacity.

On the eve of Super Tuesday, the presidential primary in Massachusetts, Clinton supporters lined up in Springfield as early as 6:30 a.m. Doors opened at 8 a.m. and attendees filed in, packing the room and lining the balcony, standing room only. Clinton took the stage at around 9:45 a.m., preceded by Springfield Mayor Domenic Sarno. 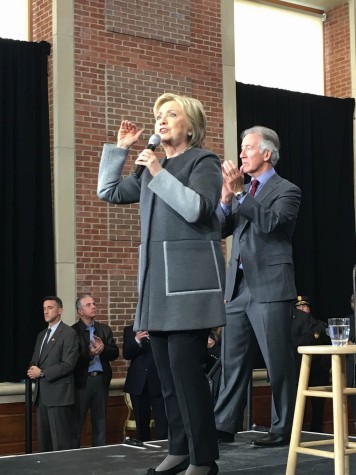 “Secretary Clinton will be making history in the United States of America,” said Sarno, who publicly endorsed Clinton for president on Feb. 27. The crowd cheered, briefly chanting, “Hillary, Hillary.”

Clinton has run a close race against Senator Bernie Sanders — ahead in the polls by 6.7 points in Massachusetts as of Mar. 1, according to Real Clear Politics. Sanders visited the area just last week, on Feb. 22, and drew a crowd of 9,000 to the Mullins Center at the University of Massachusetts Amherst.

At Clinton’s rally, signs bearing the “Hillary for America” logo were distributed among the crowd. Other signs read “Women for Hillary” and “Estoy Contigo,” which translates to “I am with you” in Spanish. Members of the Service Employees International Union, dressed in royal purple, joined a handful of women from Smith College to fill the risers on stage.

Clinton was introduced by U.S. Representative and former Mayor of Springfield Rich Neal. The presidential nominee hopeful smiled, calling the congressman “Richie” as she thanked him and recognized his years of service with past Clinton administrations.

“I don’t think America ever stopped being great,” Clinton said, finally addressing the audience. “What we need to do now is make America whole.”

She then addressed issues with the economy, the cost of higher education, healthcare and clean energy in her stump speech. If elected, she said, she will raise incomes and create good-paying jobs.

“Before there was something called Obamacare, it was called Hillarycare,” Clinton said, explaining that she would build upon the Affordable Care Act.

According to Clinton, there is 90 percent healthcare coverage in the United States. If elected president, she said that she plans to bring the country to 100 percent coverage, with lower copay costs and high prescription drug prices. 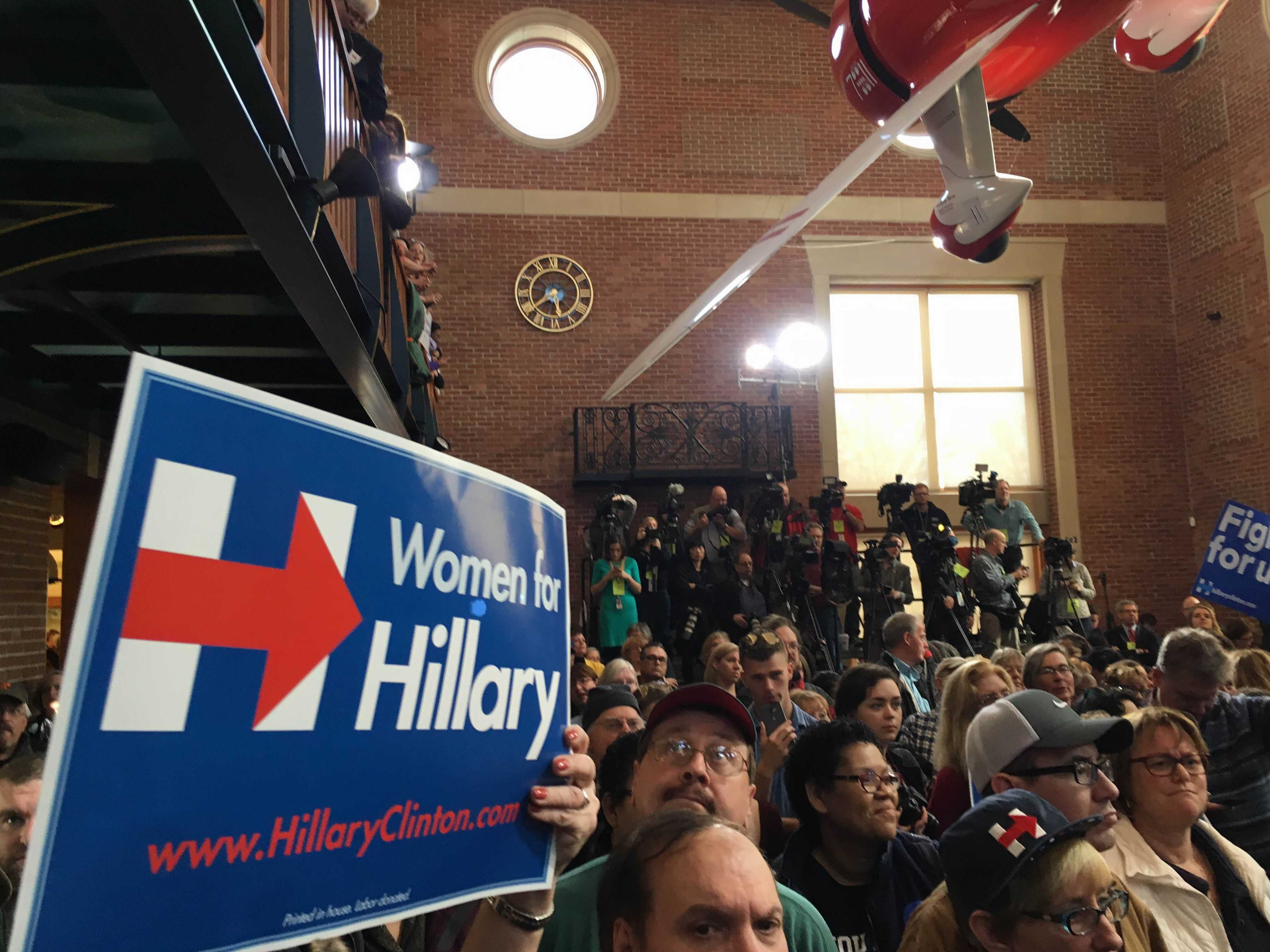 In regards to higher education, Clinton contrasted her policies against her opponent’s.

“We are going to lift the financial debt burden off of young people. It is wrong,” Clinton said, outlining her College Compact plan.

Clinton explained that she could not have gone to work at the Children’s Defense Fund after graduating college if she was paying back student loans like the majority of graduates today. But she also said that she disagrees with making college free for everyone.

The former Secretary of State pledged to “take on” the gun lobby and close loopholes, referencing the Charleston church shooting last summer that left nine dead in South Carolina.

Before signing off, Clinton promised the crowd that she will work on both sides of the aisle in Washington, saying that she is a “progressive who likes to make progress.”

“I will work with anybody to find common ground,” said Clinton. “I will also stand my ground.”

“[Clinton’s] got some backbone,” Congressman Neal said to the crowd, shaking hands and smiling in tandem with Clinton.

After her speech, Clinton took photos and shook hands with supporters before heading to an event in Boston.

Stephanie Murray can be reached at [email protected].