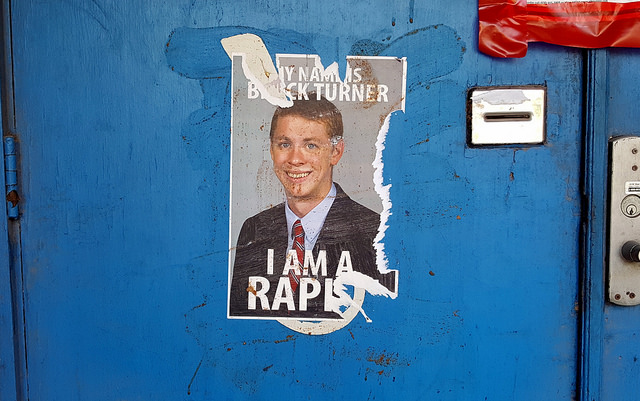 Convicted rapist Brock Turner to speak out against promiscuity

Turner was convicted in June of sexually assaulting an unconscious woman behind a dumpster. Turner’s sentence, coupled with his early release, sparked outrage nationwide.

Now, there is talk of Turner visiting college campuses to speak about the dangers of “drinking and promiscuity.”

This idea caused public outcry, as critics say it furthers victim blaming and normalizes rape culture by downplaying the severity of Turner’s actions.

Ruth Starkman, communication specialist for the department of computer science at Stanford University, wrote an open letter to institutions of higher education. She asked them not to allow Turner to speak on their campuses until he formally apologizes to the victim and takes full responsibility for the event.

“No doubt excessive alcohol is a public health risk. So, however, is sexual assault, which cannot be explained away by blaming alcohol,” said Starkman in her letter published by the Huffington Post.

Turner parading himself around as a changed man is offensive. It wouldn’t be a stretch to say that Turner’s actions highlight the fact that he hasn’t learned a thing from this experience.

Suggesting that he wants to tour college campuses warning students about what can happen when you act recklessly is a terrible attempt to save himself. Turner is clearly not remorseful because he’s still looking out for his own interest by trying to redeem his public image and reputation.

While the Turner case is incredibly relevant today, it is by no means the first of its kind.

The Netflix documentary, “The Hunting Ground,” directed by Kirby Dick, delves into the epidemic of sexual assaults on college campuses and how poorly these cases are often handled by the very institutions that students are enrolled in.

CNN News highlighted a study published in the Journal of Adolescent Health, which says nearly one in five female college students had been subjected to sexual assault in their freshman year.

The combination of alcohol and promiscuity on college campuses can be a dangerous cocktail. Aaron Persky, the judge in the Turner case, cited the presence of alcohol as one of the main reasons he gave Turner such a light sentence.

But avoiding alcohol won’t save anyone from sexual violence.

The Huffington Post reported four out of five victims knew their attacker before the violence occurred.

Persky commented on the consumption of alcohol involved in the Turner case, saying it “is not an excuse but is a factor that, when trying to assess moral culpability in this situation, is mitigating.”

While alcohol may increase the likelihood of sexual assault, it should not justifiably give rapists a “get out of jail free card.”

Turner would have faced up to six years in prison if he was charged with the maximum penalty of the three charges he was convicted of.

Many have also pointed to the Turner case as an example of white privilege within our society. The fact that a criminal-court judge stated that he didn’t believe that Turner’s case warranted severe prison time, reiterates this.

Brian Banks, a former linebacker in the NFL and now an employee at the NFL’s Los Angeles office, served five years in prison after falsely being accused of rape.

Banks is understandably angry about the Turner case, as reported by the New York Daily News.

“You know a man is guilty, so why aren’t we unleashing half of the punishment that was unleashed on Brian Banks when he was innocent and there was no evidence?” Banks said the New York Daily News. “They gave me six years. They gave him six months.”

Although both Turner and Banks had no criminal record before their convictions, Banks is an African American. He said he believes that Turner’s short sentence is “a case of privilege.”

The Turner case — for better or worse — has reopened the conversation about sexual assaults and how we as a society perceive them. It is possible that future offenders will bring up the Turner case as a means of mitigating their sentences.

Turner’s actions give the impression that you can act any way you want so long as you turn it into an educational opportunity. But it is the assault victim in this case who has taught us something about how to learn from these situations.

In her witness testimonial published by BuzzFeed, she speaks directly to Turner.

“The damage is done, no one can undo it. And now we both have a choice. We can let this destroy us, I can remain angry and hurt and you can be in denial, or we can face it head on, I accept the pain, you accept the punishment, and we move on,” the victim wrote.

She also addressed Turner speaking out about this experience on college campuses.

“I don’t see headlines that read, ‘Brock Turner, guilty of drinking too much and the sexual promiscuity that goes along with that,’” she wrote. “Rest assured, if you fail to fix the topic of your talk, I will follow you to every school you go to and give a follow-up presentation.”

The victim in this case, and victims in all cases of sexual assault, are braver than any of us can understand.

As the Obama administration’s anti-rape campaign slogan says, it’s on us to stop sexual assault.