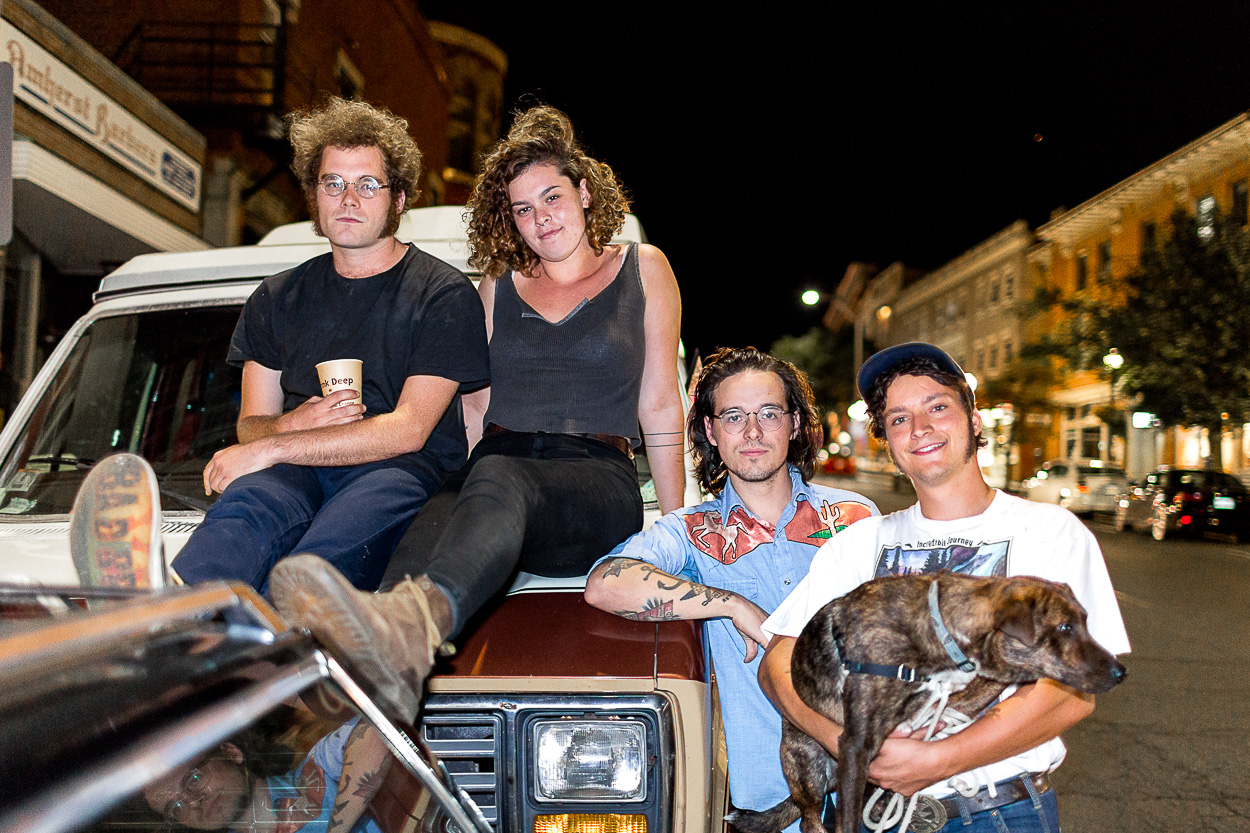 “Our sound is always in flux”

A star several thousands of light-years away, known as Eta Carinae, shines millions of times brighter than the star at the center of our own solar system.

Much closer than that is a band named after this star, Carinae (pronounced ka-REE-nay), whose four members are moving to Hadley in October to live together and record new music.

Carinae played a show Thursday night at The Black Sheep Deli on Main Street in Amherst, unleashing a slew of shimmery, danceable songs the group says they are eager to record and release in the near future.

Guitarist and vocalist for the group, Calvin Parent, from Camden, Maine, says the band belongs to the realm of psychedelia but is not limited to it.

“Our sound is always in flux” Parent said, sipping on a cup of black coffee before the band took the stage.

The band sat at a table tucked away in a corner of the sandwich shop, some light blues music playing on the restaurant’s speakers before the show started. Cricket, the drummer’s dog, wandered around the shop getting love from patrons while waiting for the band to come on around 9 p.m.

“It’s all very much us,” Parent said. “But [our sound] seems to change with the seasons, change with our attitudes.”

Carinae’s first show was in 2013 at a house in Hadley where a few of the members lived.

Since then, they have lived separately in various locations, though they played shows consistently. In that time, they released two albums,”Eta” in 2015 and “Zephyr Window“ this year.

The band splits vocals between Parent and keyboardist, guitarist and songwriter Kasey Greene, who lives in Hadley. The rhythm section is made up of Gabriel Camerano on drums and Nina Kent on bass.

Their first album, “Eta,” was recorded in the basement of their Hadley house and released on their Bandcamp website. It provides a glimpse into Greene’s songwriting prose.

The bandmates describe Greene as prolific when writing new songs and bringing fresh ideas to the table.

“We do a lot of typical things for a psychedelic band, like delay effects,” Greene said. “But we have a lot of clear lyrics and words in our songs.”

And that’s not typical for psychedelic music.

Even while the band members lived in different towns across state lines, Carinae never lost its cohesion.

Parent has lived in his van among other places for the past four months. Camerano, of Madison, Minnesota, has been living in New Hampshire. But now, they are looking forward to living together and starting the recording process.

The band has nearly enough material to record two more full-length albums, they said, and are thinking of producing at least one album on their own.

“By the time we get to recording, we have played the songs many times for many crowds,” Greene said.

Kent, who grew up in Amherst and currently lives in town, said the songs take shape over time.

“The songs go through a big transformation over months and morph into something we really vibe with, whether it’s live or recording,” Kent said.

The show at The Black Sheep was the first time the group played with Kent since she got back from a two-month trip to Hawaii. She says the band likes to push the envelope with their songs and sets because they want to keep it fresh for themselves and their audience.

Thursday night was no exception. The band played a set of mostly unrecorded songs for a little more than 30 minutes.

“I came back thinking I’m so rusty, I haven’t played much this summer,” Kent said. “But getting back into it just reaffirms this is the band for me.”

Carinae’s most recent album, “Zephyr Window,” was recorded and mixed in 10 uninterrupted hours at Sonelab Studio in Easthampton, Camerano said. It took only about two hours to record the instrumentation, vocals and overdubs for each of the five tracks on the album— a blistering pace for any band.

“We had the album in our hands and we were listening to the EP (extended-play) when we left the studio. That was crazy,” he said.

According to Greene, each song brings something different to the album. The EP spans a total run time of 23 minutes and 20 seconds, and includes a drawn-out, epic introduction track, some catchy, groovy, “jungly” tunes, to a slow ballad.

“The songs go all over the place within a five song circle,” Greene said.

Carinae, without a doubt, likes to keep things fresh. Camerano said they experiment with the arrangements of older songs by changing the dynamics and structures of past work to find new variations.

“We play songs [live] that we played months ago, that we are still changing. And we have new songs we are writing that are also changing,” Camerano said.

“Our songs aren’t always set in stone, they’re kind of amorphous in that way,” said Parent. “They’re malleable because we can change them. Sometimes we start a song in a weird way or different tempo and stick with it to see what happens. We’re not stuck in one particular way of thinking.”