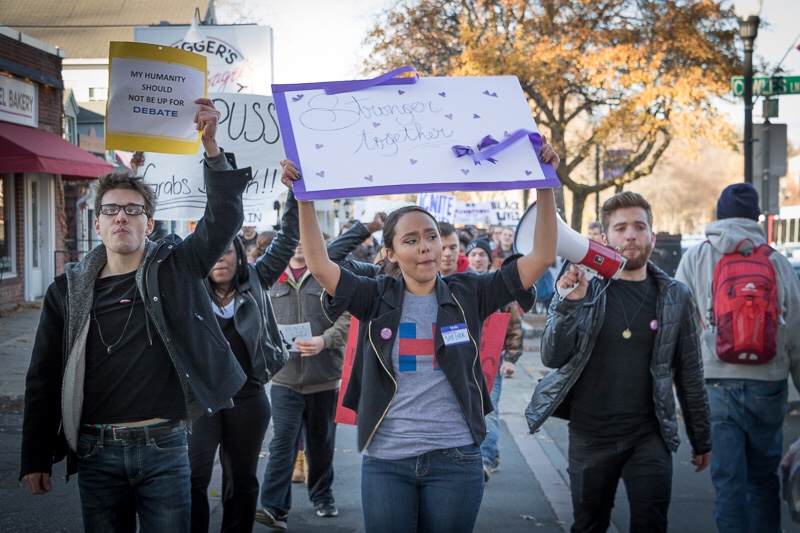 AMHERST — Students and community members gathered Friday afternoon on Goodell Lawn in solidarity. It was a time for people to express themselves in response to Donald Trump’s presidential victory.

The event “Ignite Your Right: Humanity Against Trump” drew a crowd of 150 people holding signs, chanting and coming together to address the hate rhetoric of President-elect Donald Trump’s campaign.

Speakers and artists shared their music, poetry and uplifting words in order to spread a sense of unity within the community. 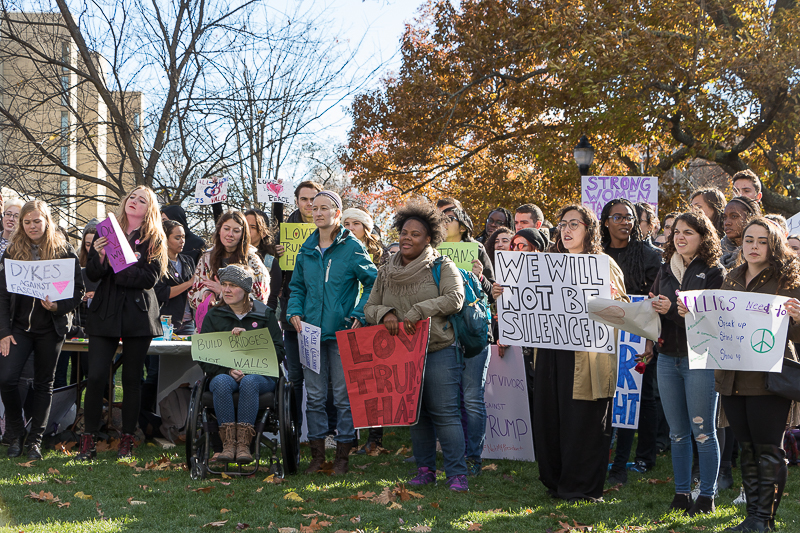 Kyle Hartmann, a senior theater major, was one of the organizers of the event. He called for the beginning of a series of grassroots movements ignited by love and passion.

After a spontaneous demonstration Wednesday morning after the election results, students planned for Friday’s event as an outlet for people to express their thoughts and concerns for America’s’ future.

“We want to make it clear that this is a space of visible dissent against the hatred and oppression that is manifested in Trump’s administration,” Hartmann said.

Miguel Paredes, a theater major whose rap name is Tuzko, performed multiple songs for the crowd. He explained his experience of being a person of color on a predominantly white campus. Along with him, the crowd chanted a part of his song, “f**** all these bigoted kids.” Another song titled, “Culture Shock,” touched on similar themes.

Students passed around a giant beach ball for people to sign in solidarity to express themselves and pink “Ignite Your Right” buttons were shared with the crowd.

Elliot Jerry, a senior political science major, spoke about his experience taking a semester off to work with the Bernie Sanders’ campaign. He spoke about the revolutionary spirit and how now is the time for communities to act. Jerry passed around clipboards for people interested in working to build student movements on campus.

Student Trustee Josh Odam spoke about racism within the election and the results. He urged white people to go home Thanksgiving break and speak with their families about social issues within our society and the outcome of the election.

Protesters then marched off campus and down North Pleasant Street into downtown Amherst, eventually gathering near Amherst College.