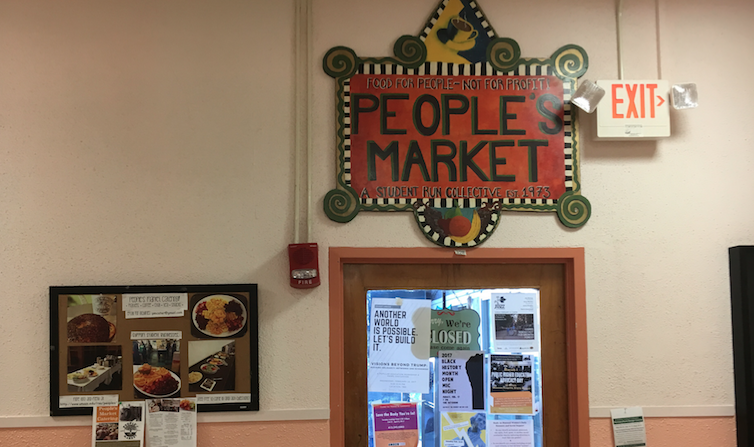 People’s Market pushes for dining dollars as The Hatch looms

AMHERST — The University of Massachusetts Amherst Student Government Association announced this week that The Hatch, a large area in the basement of the Student Union which has been vacant for years, will reopen after spring break as a new retail dining and social space.

The renovation will offer meeting space for clubs and more dining options for students, but the staff at People’s Market see the addition as another reason why their student-run business should be allowed to accept dining dollars.

The Auxiliary Enterprises office at UMass oversees student and university-managed businesses on campus. According to the office, People’s Market cannot accept dining dollars because its business structure does not make it a dining location, but rather a quick-stop convenience store.

It is not unusual for new customers at People’s Market, located directly above The Hatch, to walk away from their first transaction empty-handed after learning they cannot use their meal plan.

“That probably happens with one in five customers,” said Sophie Davis, a co-manager at People’s Market.

“When we look at the statistics of the distribution of the foods [People’s Market] sells, it’s 80 or 90 percent coffee and bagels — what we consider snacks,” said Claudia Brown, director of finance and business services for the Auxiliary Enterprises office.

“They’re really in line with our own convenience stores,” Brown added, referring to the small stores in Worcester and Franklin dining commons.

Without access to dining dollars, co-managers at People’s Market fear that they lose customers to places like Peet’s Coffee & Tea, Harvest, Procrastination Station and now, the business coming soon to The Hatch.

Those businesses accept meal plan payments, and some also sell coffee and snacks, leaving People’s Market in a tough spot.

“Having to pay cash for food is just inconvenient because I already have all this money that I can spend on food at other places,” said Isaac Harmon, a sophomore whose meal plan includes 250 dining dollars.

If People’s Market wanted to accept dining dollars, they would have to sell food that counts as “meal equivalency,” according to Corey Walters, interim director of the Center for Student Business. Walters pointed to Harvest, which accepts dining dollars and offers meal-equivalent options from a hot bar, a salad bar and a smoothie counter, as a good example of a business eligible for meal plan use.

“People’s Market does not offer that,” Walters said.

Brown, at the Auxiliary Enterprises office, identified Earthfoods as another student business that follows the meal plan requirements properly.

“They do exactly what we’re thinking of when we’re thinking of serving healthy meals,” Brown said. Earthfoods, situated across the hall from People’s Market, serves full plates of hot, prepared vegan and vegetarian food. Customers can pay normally or use their meal plans.

To some students, the distinction between “snack” and “meal” seems arbitrary. Brennan Tierney, a co-manager at People’s Market, saw no reason why it should be excluded from the meal plan.

“It’s basically the administration ostracizing a student business by prohibiting the use of a common form of campus currency, particularly for underclassmen, and not enabling students to use that at People’s Market,” said Tierney.

There is concern, as Tierney noted, that underclassmen are particularly discouraged from eating at People’s Market.

The university mandates that any student living in non-apartment university housing is required to purchase a meal plan. As a result, most underclassmen start their semesters with 250 or even 500 dining dollars on their UCards.

Dining dollars, introduced only two years ago, are a relatively new component of UMass meal plans.

“The first year we put them into play, we said, ‘we don’t really know what these things are going to do,’” said Garrett DiStefano, director of Residential Dining and Sustainability at UMass. DiStefano said that student businesses were encouraged to hold off on the new program until its effects could be measured.

Last year, following discussions between student businesses and Auxiliary Enterprises, student businesses signed a memorandum of understanding, or an MOU, that outlined their participation in the dining dollars program. People’s Market was not able to incorporate the meal plan into their business at that time.

Negotiations between People’s Market and Auxiliary began last spring, according to Wang. The issue has been prolonged because of “too much back and forth,” she said.

“We met in the fall of this school year and gave them more data evidence of why we should get dining dollars, and the meeting ended with them saying they’ll talk more and get back to us,” said Wang.

People’s Market has not yet heard back from the office.

“The negotiations committee has reached out again and we’re waiting to confirm a date to meet,” Wang added.

In the meantime, staff at People’s Market have reduced their menu in order to maintain operations.

“We hired fewer co-managers,” said Tierney. “We downsized a lot of the products we sell, so we’ve just narrowed in on selling products that sell well … to ground ourselves in a better financial state, then hopefully expand production in the future.”

People’s Market looks a little empty compared to its first years of business starting in 1973. Gail Sullivan, co-founder of People’s, looked back at a time when fresh produce and diverse, healthy food filled the shelves, competing directly with the lackluster dining options then available at UMass.

“The underlying intention behind the People’s Market was the hope that by providing something students really needed — healthy food in the center of campus — that we would be able to develop an economic base to help fund things under the control of an independent student union,” Sullivan said.

While the mission of the People’s Market has maintained its integrity since then, critics said the university has created unreasonable barriers to the cooperative’s growth, or perhaps has neglected to remove barriers as changes in campus dining unfold. Sullivan suggested that the university identify exactly what foods are fair game for students with dining dollars.

“If their argument is that People’s Market sells things that dining dollars can’t be used towards, then just make a list,” Sullivan said. She brought up the related concept of food stamps, which can be used to buy some, but not all items in supermarkets.

Auxiliary Enterprises said they hope that People’s Market can find alternative ways to expand their business.

“That’s where the advertisement, getting your public relations and news out there, somehow promoting yourself other than using the meal plans to do that [comes in],” said Brown. She emphasized that Auxiliary Enterprises has absolutely no desire to drive People’s Market out of business.