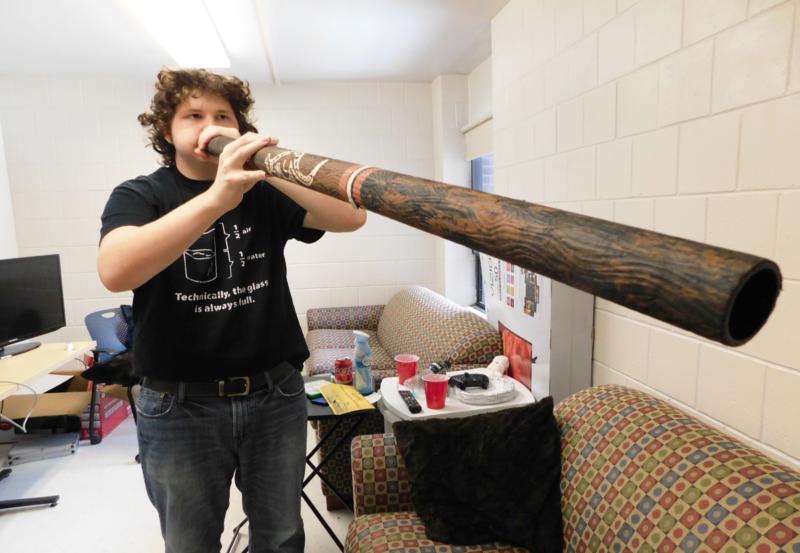 Andrew Peters opens up about his didgeridoo, the Super Bowl and finding fame on the campus Snapchat story

AMHERST— It’s a Sunday during the fall semester and the New England Patriots are on. In Foxborough, quarterback Tom Brady finds a receiver in the end zone to score another touchdown for the eventual champions.

Meanwhile in Amherst, the low, distinct buzzing sound of a didgeridoo rings through the halls of McNamara Hall at the University of Massachusetts to celebrate the scoring play.

The man behind the didgeridoo is Andrew Peters, also known as the “didgeridoo guy.” Or, as he prefers, the “Didgeridude.”

The 22-year-old transfer from Greenfield Community College quickly gained fame in the UMass community.  He first became known in the Sylvan residential area and then at the last UMass football tailgate of the year, where he made the first of many appearances on the campus Snapchat story.

“People just loved it,” said Peters. “Next thing I know, I’m on the UMass Snapchat story and I’m like ‘Oh, I guess people enjoy this.’”

From that point, he decided to make his appearances regular and the “Didgeridude” was born.

Peters has become a regular at weekend sports games and in the UMass party scene.

“If there’s alcohol, there’s a didgeridoo,” he said laughing.

Peters’ journey to becoming the Didgeridude began in 2005, when he was 10 years old. He was inspired by an episode of The Simpsons in which the cartoon family took a trip to the land down under.

“I saw Lisa Simpson playing a didgeridoo and I just knew I had to have it. I must acquire this amazing sound and I just have to bring it to everyone I know,” Peters said.

Shortly after, he obtained an acrylic didgeridoo, which is cheaper than traditional wood and has a better sound than plastic, he said.  He has been playing ever since.

At high school and community college, Peters said he was known for owning a didgeridoo, but never as the “didgeridoo guy.”

His favorite and most public moment to date came during the celebrations in Southwest following the Patriots comeback win in Super Bowl LI. He climbed to the top of the entryway to John Quincy Adams Hall, sat down and played for the crowd.

“Before the game started, I was prepared to go to Southwest,” said Peters, who watched the game from his dorm in Sylvan and headed down with his suitemates soon after the game finished.

While he called the moment “probably one of the greatest times” he has had on campus, he won’t repeat it anytime soon.

When UMass police officers arrived, Peters said he was approached by an officer and handed over the instrument.

“I asked for it back, [and] he said no, which is understandable. I mean, he’s got to keep the peace,” said Peters. “This party could become a riot at any time and anything you can do to mitigate that is good.”

According to Peters, he was told he could pick up his didgeridoo the next day from the UMass Police Department.

However, upon arriving at the station the next day, Peters said he was told that two women had come in earlier claiming to know Peters and took the instrument with them.

“At that point in my mind, I’m like ‘Oh, it’s gone,’” said Peters, who asked UMPD to look for the didgeridoo.

After a week went by without any signs of the didgeridoo, he took to Twitter for a last-chance plea to see if anyone knew where it was.

Almost immediately, a sister of the Sigma Delta Tau sorority reached out to him, saying she knew who had the instrument. Shortly after, the Didgeridude and his instrument were reunited.

Peters has noticed that the more he appears on the Snapchat story, the more he is recognized on campus.

“Right after Halloween, the first time somebody stopped me, a girl asked me to marry her,” said Peters. “I should’ve got her number, but yeah, that was an interesting experience.”

Most reactions are pretty positive, Peters said, though sometimes people can get annoyed, especially at loud parties where the sound of the didgeridoo is drowned out and it “just becomes a stick [he’s] waving around in the air.”

He also understands that some may interpret his hobby differently than he does.

“I’m bordering on cultural appropriation,” said Peters, who says it’s key to respect the culture and not use the didgeridoo to mock it.

Overall, the thing he believes people enjoy the most about the Didgeridude isn’t the sound or look of the instrument, but rather what he’s done with it.

“I found a niche,” said Peters. “I found something that no one else was doing [on campus] and I did it, and if you can do that in anything in life, you’ll usually find success. Do things that other people aren’t doing and that you enjoy and you will find success.”