“Somebody will probably try to step up, but they’ve got awful big shoes to fill."

AMHERST — Turning on the computer and reading the news will never be the same for Amherst residents like Bonnie MacCracken following the tragic death of local citizen journalist Larry Kelley.

Roughly 30 friends, family and community members gathered Monday on the Amherst Town Common to mourn the loss of the established town figure who died Friday afternoon in a car crash. Some smiled softly as they remembered the vibrance Kelley brought to town affairs, while others shed a few tears as stories were shared.

Kelley, 62, a fifth-generation Amherst resident, leaves behind two daughters, Jada, 10, and Kira, 15. He was a well-defined member of the community, best known for his blog, Only In the Republic of Amherst, where he relentlessly rushed out to crime scenes and large college-aged gatherings. Kelley held a University of Massachusetts Amherst journalism certificate and always traveled with his trusty drone, which he fondly named “Birdie.” 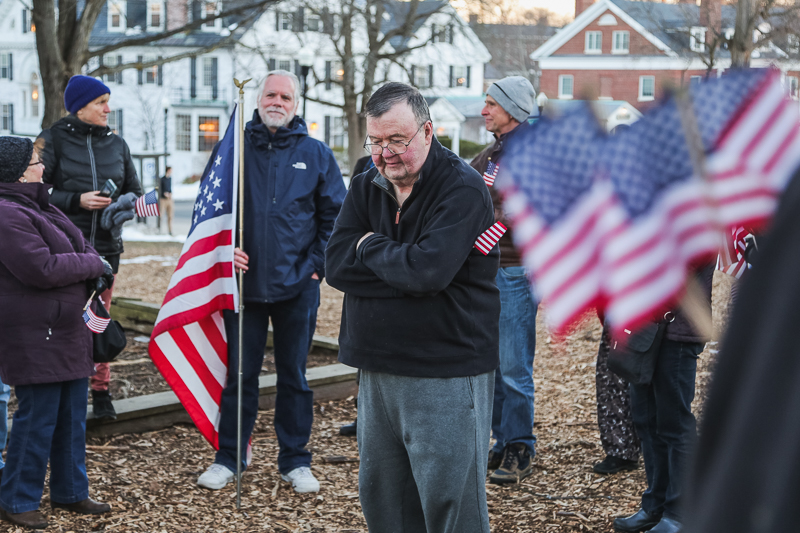 Along with his constant chase for the information the town of Amherst wanted, needed and didn’t know they needed, Kelley also ran a karate studio in South Amherst for 28 years.

“I’ve lived in town for 30 years, you kind of just know Larry,” MacCracken said. “It’s not going to be the same turning on my computer anymore.”

Kelley covered all town affairs from meetings to court cases, and always held accountable officials and college students alike, with his “DUI Dishonor Roll.” He often inserted color and commentary into his posts, serving as a strong, often controversial or even antagonistic, voice on issues of local debate like raising flags on 9/11.

“Thinking about how much [Kelley] cared about the flag, I thought this would be the most fitting way to honor him,” MacCracken said to the crowd as flags were passed out to those attending the vigil.

Throughout the event people shared stories of the many times Kelley’s compassion shone through his aggressive reporting style and fiery opinions.

“Hearing all these stories really shows how much Larry affected our lives,” MacCracken said.

Several people reminisced about how Kelley began a campaign to get throwing stars, a weapon often used in martial arts, that were available by mail order off the market. Though he tended to have strongly conservative opinions, he cared for humans above all else.

“It was an example of that he was a lot more than he was conceived as, which was a conservative firebrand,” Kelley’s longtime business partner Kirik Jenness said. “He was a deep and complex man.”

“It was moving,” Tom Kelley said of the vigil. “I know his presence in town and the respect that he got.”

Kelley’s death leaves a void, residents say, and the town of Amherst must wait for a new character to step forward.

“Somebody will probably try to step up, but they’ve got awful big shoes to fill,” Tom Kelley said. “He was so aggressive and just dove into things, it would be hard. Somebody could try, but it won’t be quite the same.”

Kelley wrote a column in the Amherst Bulletin for 14 years. With such strong opinions and an often conservative point of few, it was inevitable of him to rub a few the wrong way.

Locals like Anne Hoffman, who had few opportunities to interact personally with Larry Kelley, still remember him fondly — whether they agreed with his strong-hearted opinions or not.

“He could look like he was just a knee-jerk conservative blow horn, but it’s not like that,” Hoffman said. “He really cared so much about everything. He tried to get people to care about things, too.”

“He absolutely won me over,” Hoffman said.

Chris Hoffman, Anne’s husband, town meeting member and Jones Library trustee, said that Kelley had the honorable ability to see both sides of an issue. Though his opinions always stood strong and firm, Kelley cared deeply about the town of Amherst and its people. Hoffman is not sure if anyone will be able to fill such shoes.

“That would be tough to find someone who can really cross divides like him,” Hoffman said.

While the community mourns the loss of a main character in the story of Amherst, they also hope for a self-selected citizen journalist to soon bring the same drive, energy and as-it-happens news to the town.

“The town will need somebody who has the same unconditional love for the community, who can go out there and ask the hard questions sometimes,” MacCracken said. “But nobody can be Larry.”

The wake will be held from 4-8 p.m. Thursday at Douglass Funeral Home, and the funeral service will begin at 10 a.m. Friday at St. Brigid’s, according to Garcia.

MacCracken suggested everyone who knew and loved Kelley should line North Pleasant Street with American flags as the funeral procession goes by.