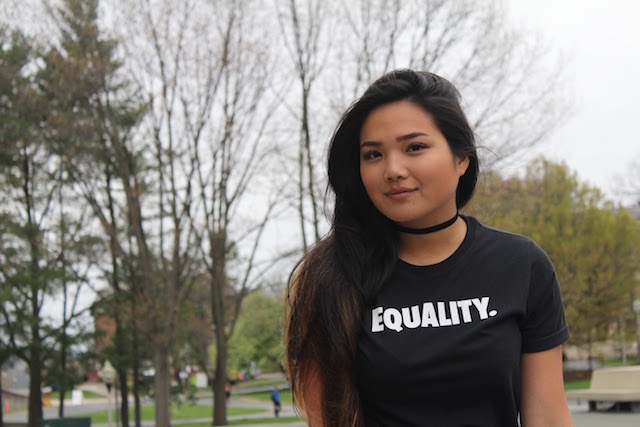 What it’s like having all white friends at UMass

Only 25 percent of University of Massachusetts Amherst students are people of color.

As of 2016, 5,176 students enrolled were African-American, Latino/a, Asian or Native American.

As someone who grew up in Boston, specifically in district six, my friends were quite the colorful bunch. In high school, almost all of my closest friends were people of color. “The black girl group” happily welcomed me into their family because I had so many close friends in the seemingly-exclusive clique.

And it wasn’t because I thought it was cool to be a part of a group that didn’t match my skin color, it was because that’s where I felt the most comfortable.

I grew up speaking Vietnamese at home, attending Filipino potlucks with my neighbors and being a host for Asian Night shows. I hung out at the Fashion Talent Club, which was always predominantly black, and I played a leading role for the alto section in the predominantly black Gospel Choir. I grew up learning Spanish with my best friend in her Venezuelan home.

I never thought twice about who my friends were or the color of their skin. I never thought we looked like a diverse Model UN group of kids, I just loved feeling comfortable and being a part of something that I felt I belonged to.

I felt intense culture shock moving from my Boston city life to small-town western Massachusetts in 2013.

I started to stick out from my new friends as the only non-white person at the party. One of my first friends at UMass told me I was their first Asian friend.

I was “the pretty Asian girl” of the group and the only one who ever felt out of place.

I was constantly followed by petite, pretty Asian girls who tried to recruit me for their Asian sororities. Who knew that was even a thing?

I was once told I could be a greatly successful supermodel. But it wasn’t because I was pretty. It was because I was an anomaly for being remotely attractive and Asian — apparently two things that rarely go hand-in-hand.

At first, this didn’t bother me. My friends were my friends because I chose them. I made some of the most amazing relationships at UMass, including friendships that I believe will last a lifetime. But after a while, I started to feel a little bit out of place among the group.

At the dining halls, I found myself levitating toward foods that horrified my friends. People called me weird. I started to be referred to as “the Asian princess” in everyone’s Instagram captions. And of course, I was asked an endless number of times to be the subject of someone’s next “cultural differences” paper for their something-ology class.

Everyone wanted to ask me about my culture because I was the only non-white American they knew. I found myself repeating the story of my childhood over and over again until I finally stopped to realize what was going on.

I had no one to talk to about missing home and the traditional food my mom makes. I had no one to dance bachata with when Romeo Santos came on the speakers in the dark and dirty basement at the party. And worst of all, I had no shoulder to cry on, no comfort to seek and no one to turn to when Michael Brown was shot and killed in Ferguson during my sophomore year of college.

I had no shoulder to cry on, no comfort to seek and no one to turn to when Michael Brown was shot and killed in Ferguson during my sophomore year of college.”

Because of this, I lived in fear of seeming “overly sensitive” when I reposted memes on Facebook about police brutality against people of color. I thought twice before publishing tweets concerning my political views and kept quiet when my friends were appalled at large, black football players hitting on them.

I held back when my friends dismissed the advantages of white privilege, and when they refused to accept the upper hand they had over me because of their race.

I walked it off when a group of men asked me if it was a Chinese restaurant when I served them as a waitress at an American-food sports bar. I said nothing when people laughed at how “ghetto” their music playlists were, scattered with rap and hip hop tunes. I didn’t stand up for myself when an ignorant man at the bar, attempting to flirt with me, ordered a sake bomb from the bartender as a joke toward my assumed ethnicity. I sat back and watched quietly as my white friends showed painfully blatant signs of intense discomfort when suddenly, on extremely rare and specific occasions, they became the minority in a group with people of color.

“So, what are you?” people asked me. I told them with a smile.

One time when I was told I looked “so exotic” I responded to their nosy intrigue with a simple answer.

When my friends voiced their feelings of discomfort following the Paris terrorist attacks in November 2015, I held back. When my housemates canceled their trip to Morocco in fear of a predominantly Muslim community while I was abroad in Spain, I didn’t stop or criticize them.

When my friends met a “hot Asian guy” and aggressively encouraged that I date him because “two Chinese people look great together,” I laughed it off and moved on. I accepted the thought that my potential to have a child someday that was half-Asian, half something else, was creepily romanticized in the eyes of my peers.

Having to go from spending all of my free time with people of color, to exclusively white people, has been both difficult and helpful.

I was forced to learn to speak up when I had no one else around me to do it.

It has taught me to be independent when I had no one to turn to during emotional times concerning the news.

It taught me good timing and appropriate filtering when publishing how I feel and what I think about the world.

It taught me that discomfort and silence are harmful forms of discriminatory behavior, that racism is an ugly and prevalent product of social power and prejudice, that opinions can be easily formed from social media platforms and to be careful of news biases.

Most importantly, I discovered the desperate need for diversity across campus, and how important it is that I do my own part to start working on it.

Having all white friends at UMass is like being the only person of color at an all white party. It’s like dancing alone to your own soundtrack every day for four years. It’s like bottling up your feelings in fear of offending people close to you, or holding back in fear of them offending you. It’s like painting your nails at home when your friends are getting acrylic French mani-pedis from old Vietnamese women for $50. It’s like dumping a ton of hot sauce on your rice while they’re dipping their fries in ketchup.

Having all white friends at UMass is like hiding your brown skin behind a white mask while your pale friends are out getting spray tans.

Editor’s note: This story has been updated.