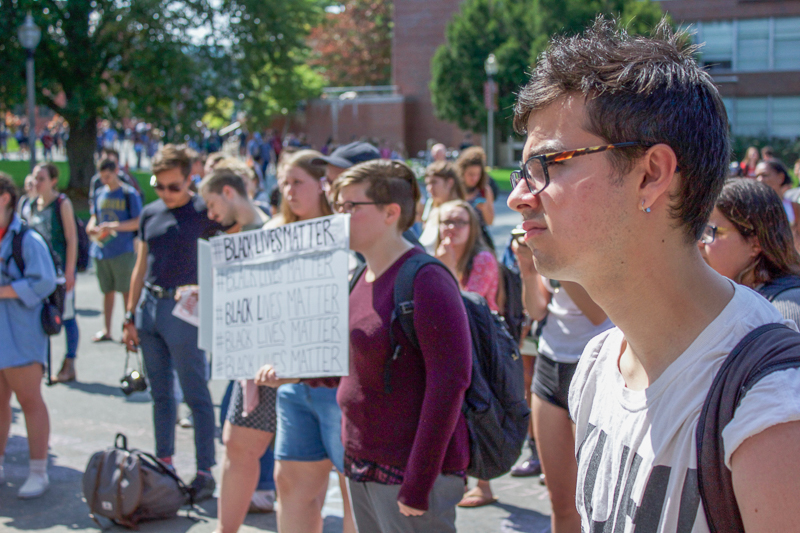 Students rally against Charlottesville violence and for DACA recipients

AMHERST— Following racial violence in Charlottesville and uncertainty around the fate of the Deferred Action for Childhood Arrivals program, over 100 students and activists gathered Tuesday afternoon in front of the Student Union to speak out about moving forward from these “injustices.”

The event, called “UMass United: A Solidarity Rally in Response to Charlottesville and DACA,” condemned the actions of white supremacists who protested the removal of a confederate statue in the Charlottesville protest that ended with the death of Heather Heyer. Students also criticized President Donald Trump’s recent repeal of the Deferred Action for Childhood Arrivals (DACA) program.

Miriam Sernik, of the Hillel House for Jewish students on campus, spoke about the anti-Jewish sentiments of white nationalists rising from alt-right.

“The same people who murdered my family and tried to eradicate my people, have been emboldened to take their racist, anti-Semitic rhetoric out in public,” Sernik said.

Gaelle Rigaud of the Black Student Union addressed the importance of solidarity in the wake of these events.

Morjane Hmaidi of the Muslim Student Association participated in the counter protest during a scheduled free speech rally in Boston where tens of thousands of counter protesters drowned out about 100 rally-goers.

Rojas Olivas, an organizer of the International Socialist Organization of Western Mass and an Amherst College student, spoke briefly at UMass before going to a protest at Amherst College. He mentioned how two juveniles allegedly hung a noose on the Amherst College campus, and the campus responded in numbers. Olivas proposed unity as a solution to moving toward his ideal of an egalitarian, democratic society.

“As always to me, again and again, the solution is community. The radical act of caring about someone else,” Olivas said.

Lou Perrington, who identifies as trans and non-binary, is a member of the Center for Education Policy & Advocacy (CEPA). They pointed out the relationship between the events of Charlottesville, the repeal of DACA and other attitudes targeting marginalized groups.

“None of these events are isolated,” Perrington said. “It’s connected to the number of trans women of color being murdered every year, Colin Kaepernick not getting signed with the NFL this year, Munroe Bergdorf getting fired from the L’Oreal diversity campaign for speaking out against racism, Eric Matlock being beaten by Northampton Police this year.”

“It’s all connected to racism, trans- and xenophobia, and it’s not going to get better on its own,” Perrington said.

Nathalie Amazan of the Prison Abolition Collective and Talya Sogoba of the Student Government Association spoke as well, followed by an open mic for members of the audience to voice their concerns and solidarity.

A UMass Police officer observed the event from horseback afar, but did not appear to stay close by for the entirety of the event. Following Tuesday’s rally, a number of the student activist groups that spoke will hold meetings to address and plan to defend DACA students. CEPA also held a meeting.