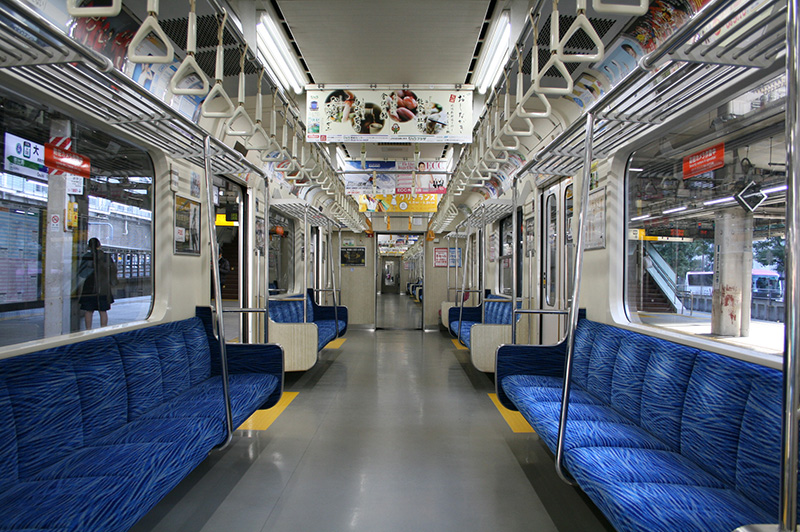 A typical Japanese Train, surprisingly empty. The perfect scenery for an existential crisis.

I saw God and he was a train

Before I left the United States, I told myself this experience would be a turning point in my life. I thought it was going to make me a more passionate, successful person. But no city can do that.

I saw God and he laughed at me. He looked like the Tokyo Station mascot, spitting out words I couldn’t understand next to his childlike, cartoon smile. God, I wish I knew what he was saying. I’m sure it was pretty insightful. He looked like the main station building but with pit black eyes, stick figure arms and unrealistically large white gloves.

He laughed at me until a man in a business suit bumped into me and said something I couldn’t understand. I realized I was staring at a cardboard cutout of a low budget mascot warning kids not to get hit by a train.

Of course, this Mickey Mouse knockoff wasn’t actually talking to me. I even knew that at the time. Yet it presented a surreal experience in the same way all Japanese trains had throughout my trip abroad last spring.

During my first week in Japan, I was on a train when I asked myself, “Why am I here? What is this contributing to my life? How will this trip translate to my own sense of self-fulfillment?”

Before I left the United States, I assured myself this experience would be a turning point in my existence. I thought it was going to make me a more passionate, successful person. But no city can do that.

I was stuck in a country where I had almost no means of communicating, yet had many thoughts I wanted to express and opportunities I wanted to take advantage of. How could I convey my hopes and dreams when I couldn’t even understand what I was ordering at a restaurant?

In a haze of self-pity and regret, I found myself at a 7-Eleven at 1 a.m., buzzed from the Japanese equivalent of a Mike’s Hard Lemonade. I slightly understood the words the cashier relayed to me, but the only thing I could say back was “thank you”; that’s all I really knew how to say properly in Japanese.

Two months later, I still had feelings of uncertainty. I would be on my usual train toward Osaka, and for the third time of the week, I would realize I have no concrete future plans. Why am I wasting my time in Japan when I could be at home working toward a career?

With a blank face, I would stare out the window and watch the skyline of Osaka before distracting myself with a low-quality Facebook video.

But one day, I had a glimmer of hope. I gave my seat to an elderly woman on a train who had to stand, because none of the other passengers would get up. As she left for her stop, she thanked me and gave me a handful of hard candy.

This was special. This was the type of thing people write about in travel blogs. It was the metaphorical pat on the back that I needed in order to return to who I was before I left for Japan. The candies tasted like maple and I hate maple, but I powered through them in the hopes I’d gain the super mental strength that I was lacking.

Life is hard sometimes, and you can always try to create experiences in an attempt to find yourself, or that missing piece of courage, charisma, or whatever you feel you may be lacking. But, it’s also okay to do something and not get slapped in the face with some life lesson in the end.

It’s easy to get caught in the cycle of accepting and even romanticizing the negative things you think about yourself. Putting yourself in an uncomfortable position with the expectation that it will fix all of those personal issues makes it even harder to break that cycle. In hindsight, maybe going to an extremely foreign country for six months wasn’t the best way to kick my motivation levels into high gear.

There’s so much that goes into studying abroad. I recommend taking things as they go. Don’t attach an unrealistic expectation to an experience just because some backpackers find themselves in Southeast Asia, or because everything turned out okay for Blake Lively at the end of “The Sisterhood of the Traveling Pants.” Sometimes, it’s better to just let the moment happen and accept it in the ways it unfolds.

For everyone finishing their applications to study abroad next fall, or for those looking into going away next spring, get ready to find God, a knockoff mascot, yourself, or maybe even nothing. Nonetheless you’ll get an experience — whatever that may be.