Weathering the storm: This is the Puerto Rican spirit

Puerto Rico isn’t irreparable, we just have to fix it ourselves. 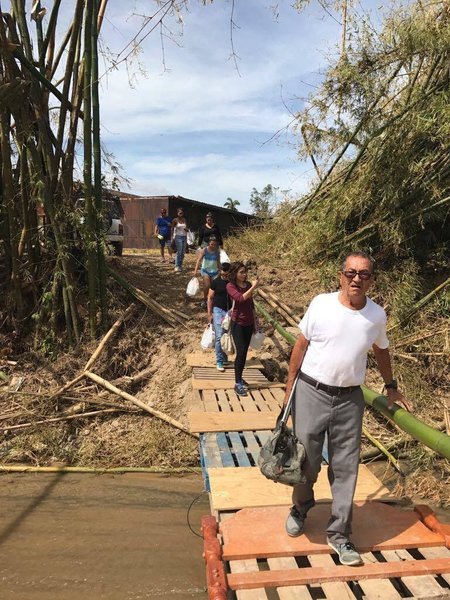 Before September 2017, the name Maria might have meant a couple different things to Puerto Ricans. Their minds may have gone to a lively Ricky Martin song from 1995, or perhaps they would have pictured Natalie Wood in “West Side Story.” Many would have undoubtedly pictured la Virgen Maria due to the island’s Catholic history.

On Sept. 20, 2017, the name became associated with one thing: annihilation.

“That day, I could barely work,” said Andrea Silva-Gotay, 26, a Ph.D. student in the neuroscience and behavior program at the University of Massachusetts Amherst, originally from Puerto Rico.

Silva-Gotay was up at 4 a.m. that day to text her family in Bayamón, in northern Puerto Rico. Her relatives were sleepless and fearful, relaying countless updates about Hurricane Maria. She received messages of tree-toppling winds and flood-inducing rains until 9 a.m. when they lost contact.

She knew her family prepared properly — they bought canned food from Costco and tied down their zinc roof with bungee cords and rope. Nonetheless, the silence was agonizing.

Silva-Gotay described herself as “one of the lucky ones” for hearing back from most of her family the day after the storm. But the extra day she waited to hear from her mother made for “the longest two days” of her life.

My own mother, Laurie Christianson, 50, waited four days before learning from my uncle that my grandmother and sister were safe in Guaynabo. My father, 51-year-old Francisco Negrón, waited over a week for Facebook updates from our cousins in Aguadilla. While television and radio news chatter filled my house in the days following the storm, nothing seemed louder than the phones that just weren’t ringing.

“People are so hungry and thirsty and they don’t know what to do with themselves,” said UMass student Viviana Angel-Cruz,  20, a Puerto Rico native. “People are panicking.”

The panic is justified. As of mid-October, 25 percent of residents still did not have running water, and only 25 percent of the island’s power had been restored, according to the Puerto Rico government.

With 49 confirmed deaths related to the storm, the death toll is expected to go up as diseases such as Zika, leptospirosis and dengue fever become increasing threats.

Hurricane Maria’s impact on Puerto Rico is undeniably devastating. The storm left behind a path of physical destruction that was amplified by underlying vulnerabilities that already existed on the island. These weak points are financial, tracing back to nearly a century ago.

The Merchant Marine Act of 1920, or the Jones Act, is often cited as one of the greatest strains on the nation’s federal budget. It requires that domestic shipping be done with domestic ships. The result is increased prices on the goods that Puerto Rico needs, but cannot have shipped directly from foreign vessels.

The economic strain on the island from this law is seen in the 44 percent poverty rate among the three million inhabitants, as reported by the United States Census Bureau. Their government amassed a crippling debt of $120 billion and declared bankruptcy in early 2017, according to New York Times.

This opened the door for the Puerto Rico Oversight, Management, and Economic Stability Act (PROMESA), which placed an oversight board, comprised of seven lawyers and businessmen, in charge of the island’s financials in an attempt to restructure the debt for better or worse. PROMESA is another legislative measure that directly impacts daily operations in Puerto Rico.

Most of Angel-Cruz’s family in the San Juan-metropolitan area is fine, a fact for which she is grateful. All of their homes were standing after the storm and her grandparents are among those with both water and power. Angel-Cruz’s mom sent generators from their home in Massachusetts to relatives on the island, and her diabetic grandmother acquired insulin from a local hospital.

Angel-Cruz’s uncle, Jorge Luis Cruz-Davila, was not so fortunate. Angel-Cruz’s family did not hear from him until three weeks after Hurricane Maria struck. Up until that point, his family had to believe that no news was good news.

Cruz-Davila’s ability to communicate with his family is a blessing as Puerto Rico is slowly attempting to return to normalcy. As supermarkets, shopping malls and schools begin to reopen, he must now find ways to provide for two daughters and six granddaughters again. This is no small task for him; Cruz-Davila is blind.

Incapable of working due to his disability, their family is dependent on government benefits, and his wife Beatriz’s income from her job at a bank. They live in one of the hundreds of caserios on the island, Section-8 funded housing provided to low-income families. Despite more amplified problems in the post-Maria desperation, it is business as usual for many.

“I think the other day he was able to go to my grandma’s house,” said Angel-Cruz. “His daughters are starting school and so they needed to shower.”

Many fear the island’s national debt crisis will keep them from receiving necessary federal relief aid, as President Donald Trump tweeted that Puerto Rico’s dues “must be dealt with.”

Nonetheless, while politicians and government officials on both ends are negotiating, people on the island and in the mainland are jumping into action.

Over the summer, he completed an internship with Mentes Puertorriqueñas en Acción (Puerto Rican Minds in Action), which pairs students with local businesses and nonprofits to discuss entrepreneurship and marketing opportunities for local establishments.

“Each summer I go back there and I get to know more people and that gets me even more motivated to go back and help,” said Villeta-Astacio.

On campus, this motivation was channeled into donation drives in the UMass Campus Center. Angel-Cruz also coordinated a fundraiser at Greeno Sub Shop on Oct. 15, which showcased Puerto Rican performers. Twenty percent of the eatery’s proceeds went to hurricane relief funds.

Villeta-Astacio, who stands out in UMass crowds with his neck-craning height and coffee-colored skin, played guitar that evening. Although naturally shy, he braved the stage at the fundraiser for his home country. He was accompanied by Puerto Rican exchange student Gabriel Perez-Casado, who opened the fundraiser by playing La Borinqueña, the Puerto Rican national anthem, on the violin.

Despite her worries for her family, Angel-Cruz is rarely seen without a smile. It’s a smile so big, her eyes have to shrink to make room for it. Her smile confirms that, even though circumstances look bad now, there is all the reason to believe it will get better.

An enormous laugh left Silva-Gotay’s petite frame as she told me that she and her fiancé planned to fit her entire family in their small Amherst home if need be. Friends in the area had opened their homes, too, extending the community of support.

This is the Puerto Rican spirit. It’s the kiss on the cheek and warm hug I got when our conversations ended. It’s the unconditional “cualquier cosa, me avisas” (“if you need anything, let me know”) shared with each student. It’s the refusal to let disasters, natural or otherwise, make us feel powerless.

When Puerto Rico rises up from this, it will be because we lifted it ourselves.

Editor’s note: The article has been updated.