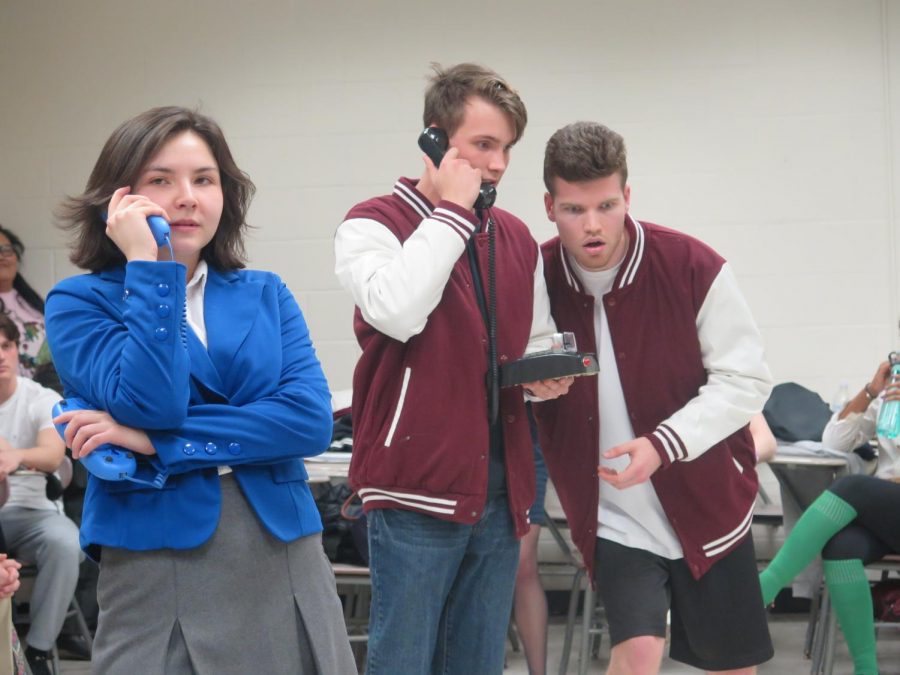 This dark comedy “Shines a Light” on today’s important topics

AMHERST — “No dabs! Not yet; it’s the 80s,” said Erin Hamilton, the choreographer of the University of Massachusetts Theater Guild’s production of “Heathers: The Musical” to the cast members on the stage. The musical number they are working on is “Shine a Light,” a satirical song that pokes fun at the “stand together and overcome” songs that offer cliche advice in an attempt to eradicate serious issues. In “Heathers” case, the issue is teen suicide. But that’s just the tip of the iceberg for this classic dark comedy.

“It’s really dark stuff, but it’s done in a farce, comical type of way. We as a guild decided to go with it to open up a conversation,” says Jessie Panton, the musical producer. She explained how after the show, the guild was thinking about having a talk-back to discuss these themes. At the showings, they will have resources and student organizations available if people want to talk.

“I want people to realize that the stuff the characters are doing is something that should not be tolerated or taken lightly. It needs to be talked about and it needs to change,” Panton says. For those unfamiliar with the 1988 cult classic, it is comparable to “Mean Girls” in the way that high school youth stereotypes are subverted in order to uncover a deeper meaning and evoke a response out of viewers.

“This show demonstrates the fact that diversity can still be celebrated in the most conservative places,” says Director Brian Belleville. Characters come from different backgrounds and bring their own baggage to the table, like two high school jocks who have grown up under the influence of hyper-masculine fathers and a troubled, mysterious new kid who comes from a violence-obsessed broken family.

Stefanie Zitka, the assistant director, explains that a message the audience can take from the show is that doing bad things doesn’t necessarily make you a bad person. Peer pressure and drama influences people in a way that they may not be proud of looking back. “In today’s social climate, people can understand that they’re not alone,” says Zitka. While the show pushes viewers to be aware of having a strong moral conscious, it highlights how common these issues can be and how people must recognize and analyze them.

The crew has added much of their own creative flair to the show, such as putting dances in places where they usually aren’t or playing with the lighting. “We were thinking of playing with warm and cool tones for the lights to emphasize the feeling of a certain act. If it’s a suspenseful scene, for example, we’ll have the cool lights on the stage to add tension, whereas if it’s an upbeat scene, the warm lights will be softer to add to the hearting-warming scenes,” says Jessie Panton.

Another unique aspect of UMass’s production is their costume design. Heather Chandler, one of the three popular ‘Heathers’ and ruler of the school, has her own custom jacket. This jacket has sharp edges for the collar to show that she’s rigid and cold, which adds subtle yet important symbolism.

Hannah Jones, the co-state manager, is the “conductor of the show when the show goes into tech.” During rehearsal, as the cast moves from one act to the next, she will shout lines to guide each scene along. Jones is also in charge of all things tech-related, such as playing the songs that the actors are singing and dancing to at the moment.

Jones, who is a student at Hampshire College, has been a stage manager for four years, and says “The process of ‘Heathers’ has been a lot of fun and was a great way for me to meet new people at UMass.”

While the production process for this specific musical is much shorter than many other shows, the cast certainly does not come up short on rehearsing. All members of the musical meet for 15 hours in Bartlett Hall over the course of five days of the week, and that’s not including the practice they do in their own time. “We’re rehearsing up until the very last day,” says Belleville.

The guild welcomes a vast range of people into the cast, such as two of the characters who play macho fathers. For actors Theo Kalantzakos and Tom Bogue, it is both their first production and their last semester at UMass.

“I’ve always had a passion for theater and figured I’d come out of retirement from high school and try the college stage. Joining has been an absolute blast!” Kalantzakos says. Anyone who wanted to audition was free to give it a shot, despite their major or background.

While some members may have more experience than others, it is clear how hard everyone works to succeed in their role. It is certainly not without the help of the director and assistant director, says Isabelle Marseille, who plays Heather Duke. “Brian and Fef have helped a lot with having us do character work exercises, so it really helped us get into character,” said Marseille.

When not in character, the members of the performance joke around and are supportive of one another. “You look cute today, Brian!” one of the cast members shouted from the auditorium seats as Belleville stood on stage to go over notes, to which the other members of the guild hollered at in agreement.

The show will take place Wednesday, March 7, Thursday, March 8 and Friday, March 9 at 7 p.m. in Bowker Auditorium. Tickets can be purchased here.