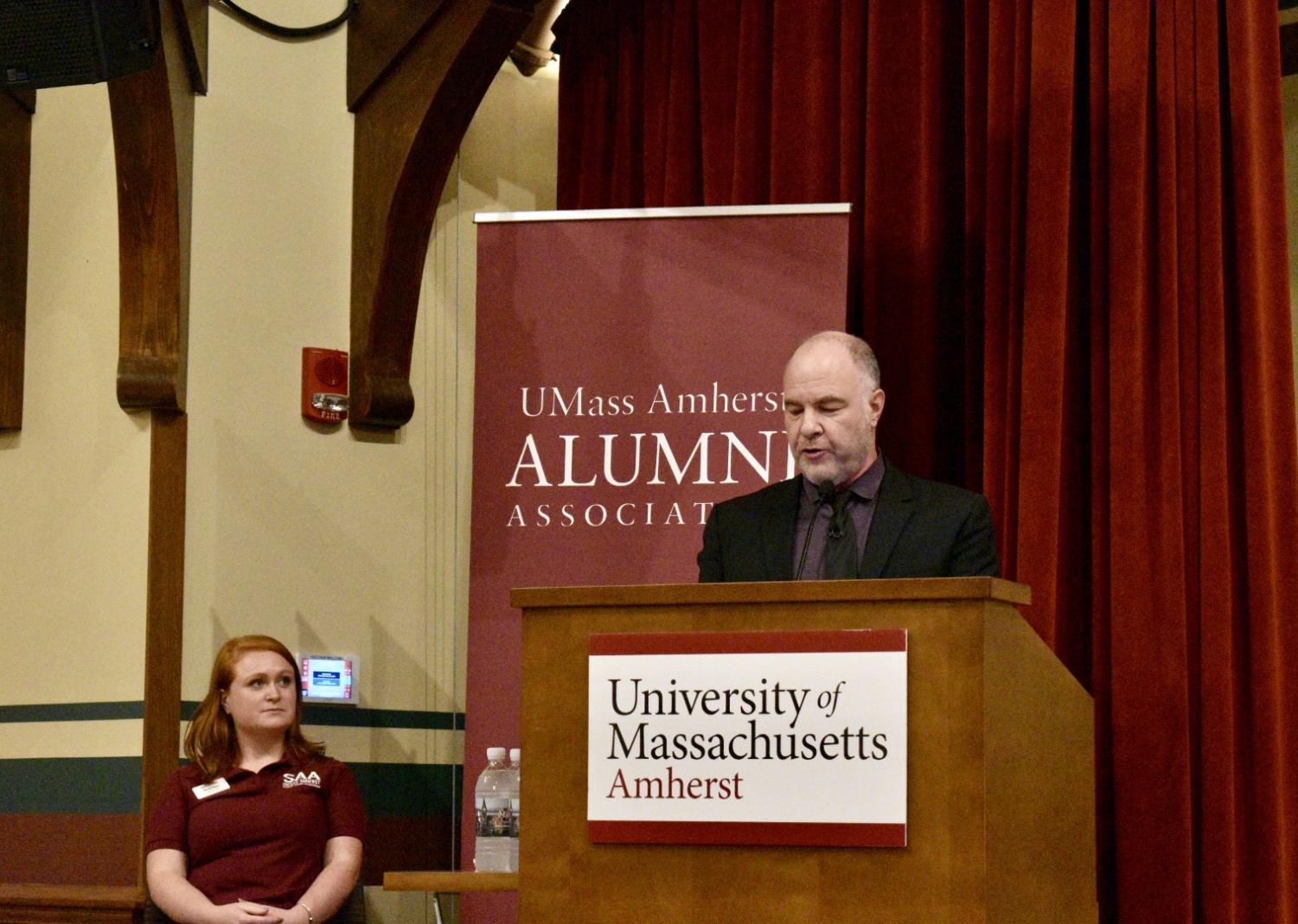 At UMass, Jackson Katz seeks ‘paradigm shift’ in how we understand sexual assault

Katz's presentation, titled "Men and #MeToo," touched on a wide variety of topics related to the timely issue of sexual assault.

AMHERST — As a sophomore at the University of Massachusetts, Jackson Katz covered a protest for the Daily Collegian during which women demanded better lighting on campus. Katz was frustrated by the complete absence of male protesters present and inspired by the women speaking up for their own safety.

Katz went on to become the first man to graduate from UMass with a minor in women’s studies, walking across the stage in 1982 into a career of activism.

Katz and his colleagues founded the Mentors in Violence Prevention (MVP) Program, which focuses on gender violence prevention and leadership training. The program — which introduced the “bystander approach” to sexual assault — has become one of the most influential in its field, with strategies implemented by sports teams, corporations and even militaries.

Tuesday, Katz returned to campus for a presentation, titled “Men and #MeToo,” that touched on a wide variety of topics related to the timely issue of sexual assault. Katz focused on the need for a “paradigm shift” in the way sexual assault is understood, discussed and ultimately prevented.

Jackson Katz, a social researcher, asked men what they do on a daily basis to avoid being sexually assaulted. Then he asked women. pic.twitter.com/GjniLR4iIZ

Katz explained how sexual assault is commonly considered a “women’s issue,” despite the fact that men are the perpetrators of an overwhelming majority of sexual assaults. This removes accountability for these crimes, and in turn leaves much of the responsibility for solving the problem to women, who are most often the victims of gender violence.

The terminology we use when referring to these issues also points to misconceptions. For example, assault survivors are often called “accusers” by media outlets and government officials. Katz detailed how our society is accustomed to feeling sorry for victims of crimes. However, when we label sexual assault survivors “accusers” people are likely to express empathy for the perpetrator, who now appears to be a victim.

These ideas are especially timely given the recent Judiciary Committee hearing for Brett Kavanaugh. Even while many people believed Dr. Christine Blasey Ford’s story, many also felt Kavanaugh still deserved to be a Supreme Court justice. This belief was the result of the dangerous “boys will be boys” normalization of abusive behaviors, Katz said.

To combat this dated and unacceptable mindset, Katz urged the Old Chapel audience to organize and express disdain for the current understanding of sexual assault. He noted electing progressive, diverse and pro-feminist candidates will force the government to take the issues more seriously.

Katz explained that men must be more involved, for the good of all Americans. Although a majority of victims are women, sexual assaults can have serious impacts on the lives of men. When a young boy witnesses his mother being abused by his father, for example, it can create trauma that lasts a lifetime.

Katz detailed how these child “witnesses” can be victims of assault themselves, because they experience many of the same psychological effects as their mother does. Children who grow up in environments of abuse are far more likely to become sexual assault perpetrators themselves, Katz said.

Still, Katz argued the only real way to make a significant number of men become involved with preventing gender violence is to make leadership training an expectation in education, jobs, sports, etc.

He used the example of a college student wanting to become the president of his fraternity. Katz said that the student should be required to take a one-day training course on preventing and recognizing sexual assault, or be removed from the running for president. In this way, men will constantly be exposed to the realities of gender violence, and will be more likely to take a role in activism when they fully understand the issues.

Looking forward, Katz said that social media has allowed women to have a louder voice when speaking out against sexual abuse. Behavior that has gone unpunished in the past is no longer acceptable, so men in positions of power especially must be knowledgeable about the issues or risk being replaced.