Catch the Doo Wop Shop this Friday at 7 p.m. in Hasbrouck.

AMHERST — Ten black shirts, 10 colored ties, and 10 stunning voices to accompany them — founded in 1993, the UMass Amherst Doo Wop Shop is the oldest a cappella group on campus.

Since their founding, UMass’ only all-male a cappella group has popularized themselves not only throughout their campus but also on platforms like Spotify, iTunes and YouTube. 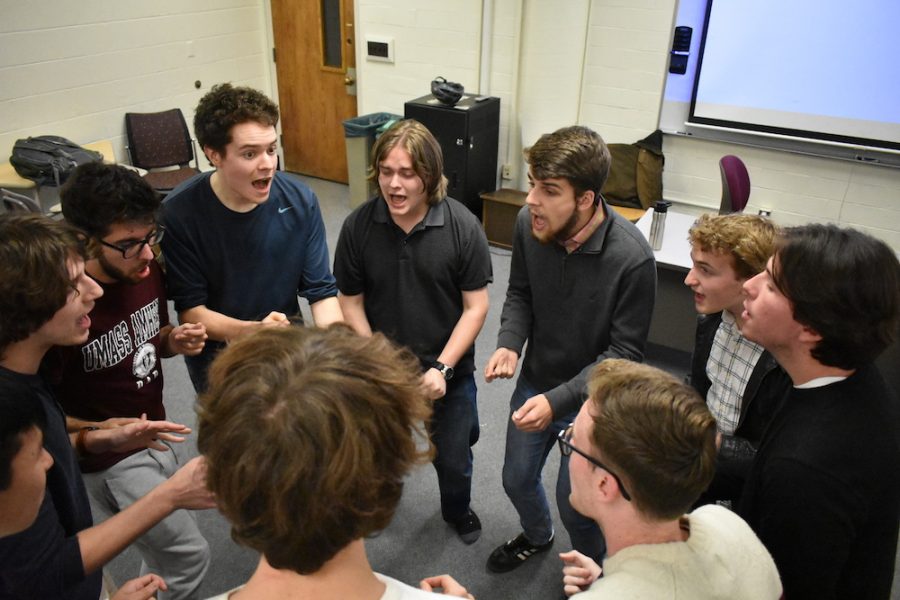 The UMass Amherst a capella group, Doo Wop Shop, rehearses Todd Rundgren’s “Hodja,” on Oct. 14, 2018, in preparation for their Halloween concert on Oct. 26. The concert will be held at 7 p.m. in room 20 of Hasbrouck Laboratory. (Carly LaCross/ Amherst Wire)

Cheries, a psychology professor at UMass Amherst, maintains contact with both past and current members.

“There was no a cappella scene on campus at the time,” Cheries added, referring to his college years in the mid to late 1990s.

Cheries recalled that the group evolved from serenading their girlfriends to becoming a traveling act on campus going from door to door, singing to people throughout UMass dorm buildings. “They put song ads on campus,” Cheries added. “The five of us ended up making it a real a cappella group. We had our first concerts together and sang for the university.”

From then on, this group of vocally talented men became officially known as the Doo Wop Shop.

From campus to computers — Ascending to multi-platform fame

The Doo Wop Shop is probably best known for their 2010 Disney Medley, which has over 11 million views on YouTube. However, like in all college a cappella groups, those members have since graduated, leaving room for new members and fresh talent.

Aside from performing at their annual Halloween, Winter, Valentine’s Day and Spring Concerts, the Doo Wop Shop keeps busy.

Some of the Doo Wop Shop’s veteran members experienced performing and winning the title of “College Champion” on the WGBH game show “Sing That Thing!” A few recently-graduated alumni of the group— Ethan Dunleavy, Elijah Sontz and Varun Shankavaram — experienced singing at Radio City Music Hall’s “Christmas Spectacular” in 2014. They also had the honor of singing for President Obama and First Lady Michelle Obama at the White House in 2014.

The Doo Wop Shop performs a diverse array of songs at their concerts, and they sing tunes “from the 1950s up until now,” said 22-year-old Doo Wop Shop alum Elijah Sontz.

The guys behind the ties 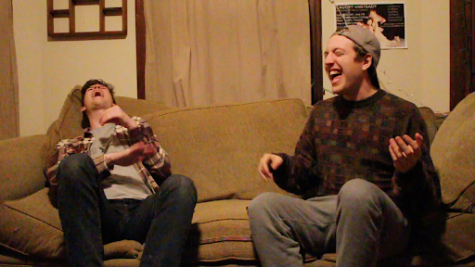 Although well-known on campus and the internet, the Doo Wop Shop prides themselves on prioritizing their fun over their skill. When practicing John Denver’s “Take Me Home, Country Roads,” it didn’t take too long for Sontz and Dunleavy to spontaneously change the lyrics from “country roads” to “country hams.”

“We don’t just like to sing the song, we like to goof around with each other while we’re doing it,” added Mike Spector, 22, a BDIC music business major.

Playing video games, stressing out about exams, arguing over who has to do the dishes next and randomly harmonizing to any given song — the Doo Wop Shop’s group chemistry embodies the essence of college-aged a cappella boys.

Each member of the Doo Wop Shop contributes his own unique “mouth noises” to the group. For example, Sontz  is well-known for his boy-band style singing of the Doo Wop Shop rendition of The Backstreet Boys’ “I Want It That Way.” In contrast, Weloth has a more “rock-and-roll” oriented voice when he performs “Cryin’” by Aerosmith at a Doo Wop Shop show, and he also performs his rock-and-roll style in his band when he’s not doing a cappella.

Although quite a few singers in the Doo Wop Shop have an experienced singing background, the group accepts members based on the talent that one displays at the audition. Dunleavy said that he had no prior singing experience besides “singing along to music during car rides.” He said the Doo Wop Shop looks to establish a diverse range of voices when selecting new members.

Dunleavy explained that “anywhere between 25 and 60 people” come to audition.

Spector said he was intrigued to audition when he heard that the Doo Wop Shop performed for the Obamas. “I want to perform for the Obamas!” Spector recalled thinking. “Once I committed to UMass, I was set on auditioning,” he added.

Sontz recalled his own audition waiting “all day” at Bartlett during his callback as a first year. “The callbacks started at like 2 p.m. and I didn’t leave Bartlett until like 11,” he said.

“It’s definitely scary auditioning for anything because you don’t know the outcome,” Sontz added. He stressed that it is always still important to audition “because the worst they could do is say no.” 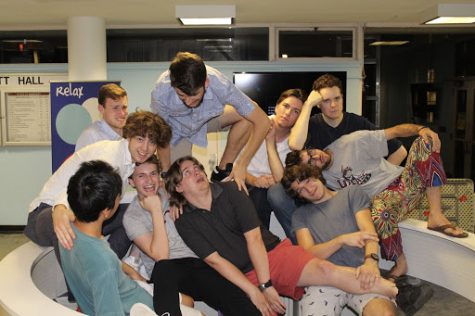 Spector recalled the feeling of relief at the end of his own audition when the Doo Wop Shop members “all came storming into the room screaming ‘you made it!’”

Other than singing in the Doo Wop Shop, Mike Spector is well-known around campus for opening for Lil Yachty and Khalid at the 2018 Spring Concert with his own original songs “Mockingbird” and “Wonder with Me.” The Doo Wop Shop performs Spector’s “Wonder With Me” at their concerts.

Returning for his second year in the group, Weloth said that he felt “welcomed” since he aced his audition. Weloth added that he felt comfortable joining the Doo Wop Shop, despite it being late in his college career.

“[The Doo Wop Shop] has been a growing experience as a vocalist and also a person and performer,” Spector said. “Everyone looks out for each other and is very supportive of each other.”

Dunleavy views his own time spent in the group as a very positive experience. “It’s lead me to be a little more outgoing, and I’m not a terribly outgoing person — so having that is a nice way to meet new people.” 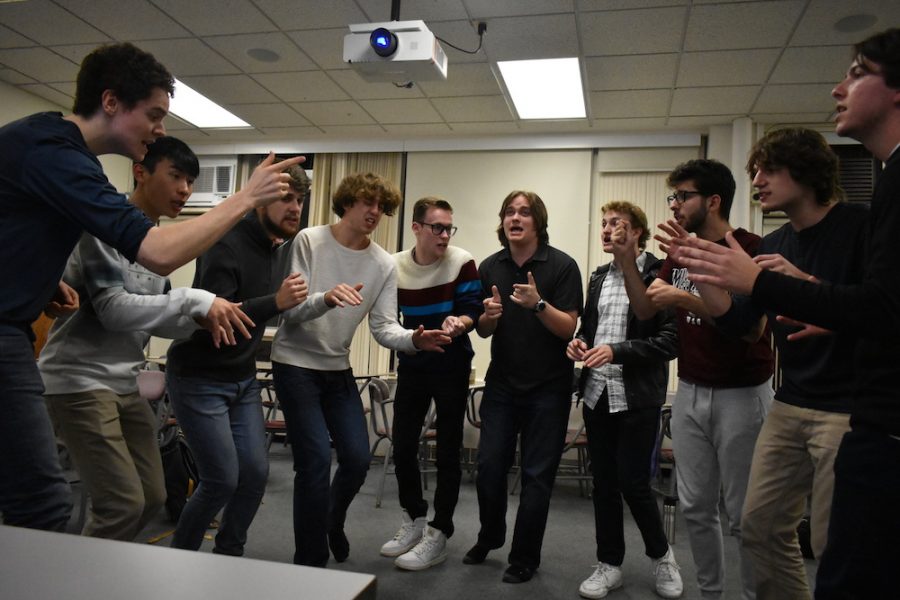 Doo Wop disclaimer: They’re NOT like “Pitch Perfect” (or the sequels)

Sontz mentioned how students often, mistakenly expect to see a “Pitch Perfect” style, choreographed competition. “If we do attempt, and the keyword is ‘attempt’ choreography, we don’t take ourselves too seriously,” Sontz said.

Sontz added that the Doo Wop Shop is unique at UMass because they’re “one of the few groups on campus that doesn’t compete when it comes to singing.”

Henry Zagarella, 22, UMass graduate, also believes the Doo Wop Shop is distinct from most other college a cappella groups. “We have fun when we perform and we like to interact with the audience as much as possible. I think that separates us from other shows because you can see that we’re all having fun and it’s not too serious,” Zagarella said.

“If you want a relaxing night where you see some guys giving it their heart and having a good time, that’s our show,” Sontz added.

You can catch the Doo Wop Shop this Friday at their annual Halloween Concert. They will perform at Hasbrouck Laboratory at 7 p.m. Entry to the event is free.

If you can’t get enough of the Doo Wop Shop, make sure to check out Maria Manning’s documentary, Keeping Shop.