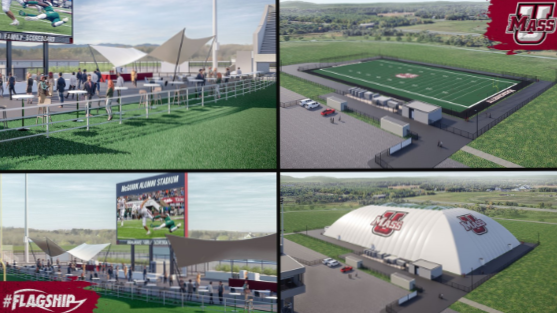 The project will be partially funded by two donations: a $5.58 million gift from Martin Jacobson and $500,000 from the Manganaro family.

AMHERST — An $18 million renovation is scheduled for the Warren P. McGuirk Alumni Stadium at the University of Massachusetts and the surrounding area in Amherst and Hadley, including a separate turf practice field with a seasonal dome, a video and auxiliary board, a new hospitality plaza and two new sets of bathrooms, according to a University of Massachusetts press release.

The project will be partially funded by two donations: a $5.58 million gift from Martin Jacobson and $500,000 from alumni Paul and David Manganaro to upgrade the stadium’s scoreboard screen.

According to UMass Athletics, no student fees will be needed to fund the rest of the $11.92 million.

“The Jacobson and Manganaro gifts are major contributions to the overall project for McGuirk Stadium and the turf practice field/bubble,” said Assistant Athletic Director John Sinnett. “The balance of the project will be paid by additional fundraising and central campus capital project funding.”

Construction will begin in spring 2019 and is scheduled to finish by the beginning of the 2019 football season.

Jacobson, a 1968 UMass graduate, found success in him and his brother Richard’s sports apparel company, Nutmeg Industries. Paul Manganaro, a 1987 UMass graduate, was a former linebacker for the Minutemen and is currently the President of the UMass Gridiron Club, which raises money for the football program.

“This project will have a long-term positive impact on our athletic department, fans who visit McGuirk Alumni Stadium and UMass students,” said Director of Athletics Ryan Bamford in a UMass Athletics video.

The hefty price tag was not mentioned in UMass’s press release regarding the renovations but rather confirmed by athletic director Ryan Bamford on the team’s televised Signing Day earlier this year.

According to a request for proposals (RFP)  last year, UMass estimated the project to cost around $10 million. Bamford, at the same time as the RFP was released, did not believe that this was likely.

“If I had to guess, we’ll be somewhere in the mid-$20s,” Bamford said in an interview with the Daily Hampshire Gazette last April. “If we can’t get the funding right, we’re not opposed to a season bubble like BC and Harvard have, but I’d like to build something fixed if we could.”

Originally announced as an air-supported bubble, the turf field will have a seasonal dome and be used by sports teams for practice. Although it will be primarily used for the football team, any team — intramural or collegiate — will be allowed to use the 240 by 400-foot field when weather conditions aren’t fit for outside practice.

“The South End Zone project will give us some terrific entertainment space and the new HD video board and sound system will enhance the fan experience inside McGuirk,” Bamford said. “We are also thrilled with the new indoor turf facility and know it will give our sports programs and student body training opportunities during the winter months.”

Renovations will also make the stadium more accessible for all fans.

“For McGuirk Stadium, the ADA enhancements will assist us with making the venue easier to access for fans who need easier access to the stands,” said Sinnett.

With a struggling football team, Bamford noted that the project is another attempt by the university to expand its program since moving up to the Division-1 Football Bowl Subdivision in 2011. The team finished with four wins and eight losses last season under their former coach Mark Whipple, and has sinced hired former Florida State offensive coordinator Walt Bell to fill that void.

“These changes to McGuirk Stadium are going to have a positive effect on the program,” Bell in the press release.  “They are significant for recruiting, and will assist us as we continue to grow and improve as a program, especially next winter and spring.”