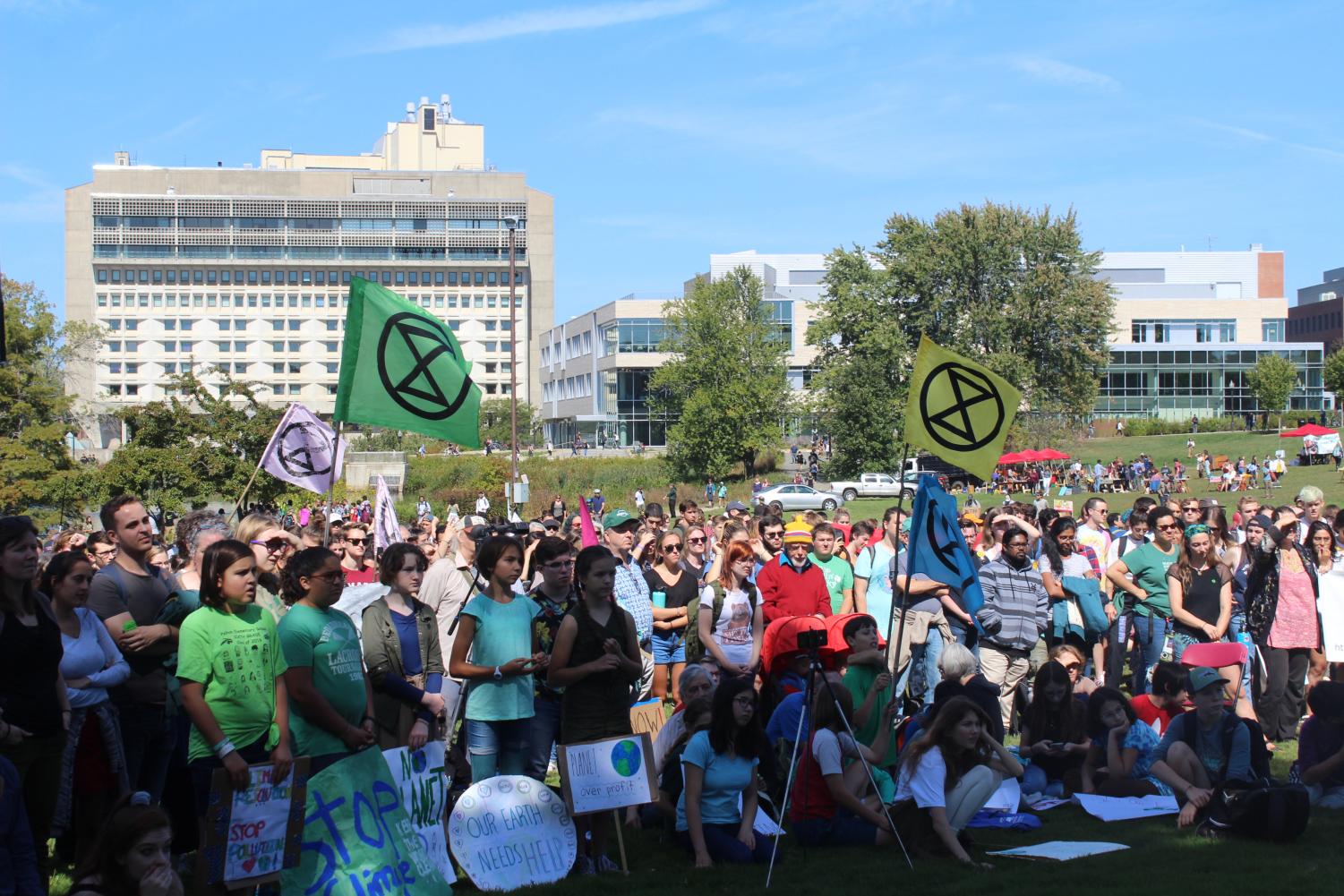 AMHERST—A young boy from Amherst-Pelham Regional Middle Schools leaped up from the bed of grass in the middle of an enclosed circle. As he reached the microphone, he looked around observing the 300+ college students and community members, holding up colorful banners and homemade flags. To his left, makeshift environmental houses stood in the grass.

“Our beautiful planet, our earth, our home is not being heard. The climate is warming. The planet is changing in ways that can endanger us all, but no one is doing anything about it, ” Jackson said. He added that President Trump doesn’t seem to care, despite the many lives which have already been affected through the effects of climate change.

“It seems like we are not going to convince him to do anything which is why we need to do something. We need to join together and make change,” he yelled to the crowd.

To Jackson, staying quiet is not an option. He and fellow students who attended the walk-out from local elementary and middle schools will be the ones to face the most severe consequences of a warming planet.

As he went to sit down, another rallying cry boomed from around him.

On Sept. 20, 2019 chants from adults, children and college students were heard across the 1,450-acre University of Massachusetts campus during Extinction Rebellion and Sunrise Movement’s “Walk Out for Climate” campaign.

The two-hour-long climate walk-out, supported by more than 20 campus and community groups, demonstrated the demand that the Pioneer Valley has in addressing the issue and accumulating support for the cause. During class changes, UMass’ 29,000 student population looked on toward the campus pond, viewing a call to action that could no longer be silenced; reasons for a walk-out rang louder than the Old Chapel bell through multiple chants, speeches and musical performances. 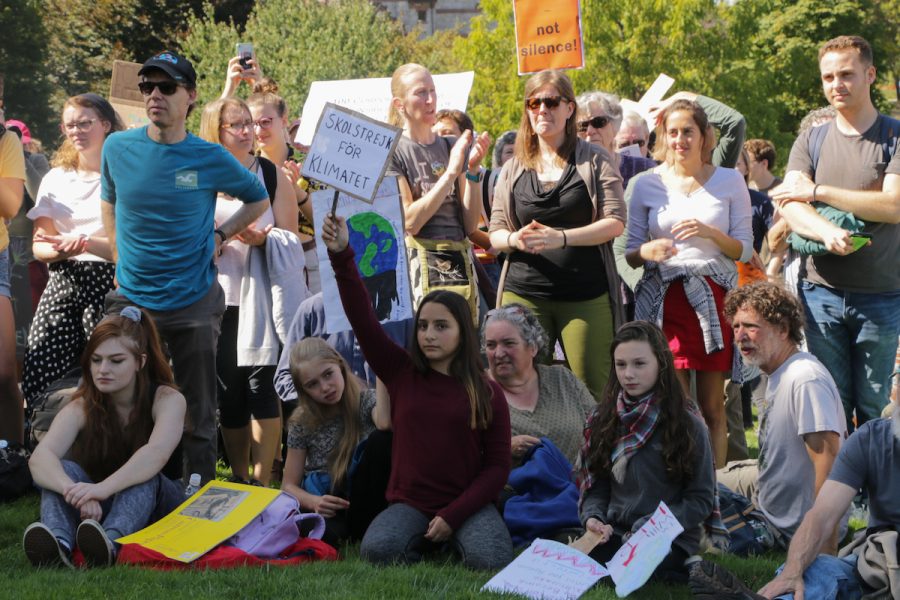 Gallery|7 Photos
Justin Risley
Olivia Didonna is a student at Shutesbury Elementary School. She said she came to the walk-out because of her love of animals and supporting the world. At school, she fundraised $600 for the cause. “This is just what I want to do with my life,” she said. “There are so many people that want to help but there’s not enough so we have to convince people to stand up for the world and help the Earth change.”

Nadia L’Bahy, a hub-coordinator for UMass’ chapter of the international climate-justice organization the Sunrise Movement, was the first to speak.

“Our country’s use of fossil fuels is hurtling us towards run-away climate change, the point of no return, by the time I’m 30, by the time my little sister is 20, but my generation is hard-working. Our generation is resilient. Our generation has reason to be hopeful,” she said. “We have the solutions and all we need to do is join in large numbers and demand that our politicians enact them.”

In an interview with the Amherst Wire, Extinction Rebellion coordinator Emmalie Dropkin said the movement began acting in the United Kingdom last year that called the government to declare a state of climate emergency, to act as if we were in a state of emergency and to end fossil fuel emissions by 2025.

“In the United States, they started a fourth demand that essentially is about the idea of a just transition,” Dropkin said.  “If we are going to create a world that is more sustainable and different than the one we have now, we have to take into account the histories of environmental racism: the rights of indigenous peoples, low-income communities, communities of color and other communities that have been historically targeted by environmental racism.”

As Dropkin appeared to UMass last Friday, the energy of concerned environmentalists and allies was cranked up by five notches.

Glen Ayers, Dropkin’s media contact for Extinction Rebellion, stressed that walk-outs for climate change are the starting points to fundamentally change our society.

“We have never had this kind of climate change while humans have been here…we’re driving ourselves off that cliff that we are already speeding towards. At some point, we’ll already be over the cliff and there will be nothing underneath us but air,” he said as he expressed that the public can not continue living in denial of possible extinction.

When asked what the goal was for these various global movements inspired by Thunberg, Ayers said, “we want the universities, the towns, and the government to declare a climate emergency – and take it seriously, take this situation seriously because it’s life or death.”

Ayers and Dropkin aren’t alone in their opinions on the dangers of climate change, as many communities, student and faculty groups expressed the toll climate change will have.

Bela Schultz, a hub coordinator for the Sunrise Movement said that a walkout is a tool of protest and political dissent that has been used in movements for centuries.

“Walking out of UMass is subverting the education system which is not prioritizing climate change, not prioritizing teaching students what the future will actually be,” said Schultz who said education prepares students for a future that used to exist instead for the one that is coming. “We’re not being taught how we can participate in the solutions that are needed in the next two years.”

Tim Scalona, the president of the first-generation and low-income student partnership, said that he and his siblings were homeless for over seven years before he came to UMass. He spoke on disastrous effects lower-income communities face, with the threat of climate change that will continue to reinforce and perpetuate existing inequality as well as leave those more vulnerable to health risks.

Kristen DeAngelis is a representative for 500 Women Scientists, an international group of women involved in STEM in over 100 countries who spoke on the importance of understanding the science behind the issue.

“Our mission as 500 women scientists is to serve society by making science open, inclusive and accessible to all people,” she said. “Right now, the science is unequivocal.”

She elaborates on fossil fuel emissions that have already caused one degree of warming on our planet, as carbon dioxide emissions continue to accelerate today: “If we do nothing, the earth is going to warm by a couple more degrees by the end of the century which will be a devastating outcome for people.”

She asked the crowd to do three things: talk about the severity of climate change, vote and get involved in our democracy and push for the need of a declared national climate emergency.

TOAST, a UMass improv comedy troupe, also came up to the microphone to talk about a big display put on in Central earlier in the week that was covered up with the message: “climate change is propaganda.”

“We’re all here to tell them ‘no it’s not!’ Climate change is real and it affects all of us,” TOAST director Thomas Coughlin yelled to the crowd.  He told a story about a 70-year-old man who couldn’t swim in the river by his house because it was too big, now he must tell his grandchildren they can not swim in the river because it is too small.

“Water is life for us. Water is beautiful. We love water but in this country, the almonds we eat and other crops we eat are grown in deserts in California. We waste water. We fight wars in Iraq destroying their water infrastructure. The mighty Euphrates River, the Cradle of Civilization, you can walk across it at some points because bombs made by Raytheon, which UMass is partnered with destroys water infrastructure,” he said before asking everyone to think about the impact of climate change on our story and the person’s next to us.

Throughout the event, various campus clubs and organizations such as the Center for Education, Policy & Advocacy, Students for Renewable Energy, Western Massachusetts Committee for Democracy in Brazil, UMass Students for Justice in Palestine, UMass YDSA, Massachusetts Society of Professors and UMass Democrats joined the conversation to encourage students to work and understand the nuances of the issue and most importantly, stand up.

State Senator Jo. Comerford and State Representative Mindy Domb, who came down from Beacon Hill, showed their support and encourage students to stay active locally and at Beacon Hill.

Domb spoke about her work towards making bills that include a net-zero carbon stretch code and a filler on a bill for the divestment of public pension funds to fossil fuel companies.

“People power is what moves government. You are the magic we need,” said Comerford who added that it’s the crowd who will help pass the Green New Deal. “Massachusetts can and must move,” she said as she points to the crowd, stepping back from the microphone with a round of applause.

A call for a climate strike a UMass was not random, however, it was inspired by teenage youth around the world begging for improvement in legislation to save the Earth.

How It Came Together

Last Friday, millions of people across the globe participated in one of the largest youth-led movements in history.

The walk-out was planned as an initial kick-off even for the organizations that hosted the event, both had been introduced to the Pioneer Valley within the last year: Extinction Rebellion and the Sunrise Movement. The groups are dedicated to raising awareness and implementing institutional change for the state of climate emergency the country is in.

Schultz said the local chapter of the Sunrise Movement was started by multiple students, inspired by the former UMass Divest movement that made UMass the first large public university to divest from direct fossil fuel holdings. Since the natural conclusion with Divest came to a close, Schultz said there has been a gap on campus for students that are passionate about climate justice.

The event on Friday was simply the starting point.

Jon Blum, a junior economics major and hub coordinator for The Sunrise Movement, wants fellow students to get excited about the cause. He said at a campus like UMass it is especially important because it accrues about 25% of the state government’s carbon emissions.

He said that The Sunrise Movement hopes to work towards more transparency and sincere dialogue with the University. “We’re not only trying to achieve our certain goals [like a carbon-neutral campus] but really try to build relationships in the long-term that would really help engender this change.”

In an attempt to move forward, The Sunrise Movement and Extinction Rebellion created a list of demands to the Five College administration.

In response to the global climate strike, Chancellor Subbaswamy wrote that while the campus must do more,  it is a complex system that in many ways operates as a substantial city.

“We provide invaluable services to our students and the Commonwealth, but we are an energy-intensive enterprise. So, I encourage your engagement so that we can chart a path together to create a sustainable campus,” he explained.

Before heading back to the grass, Jackson urged everyone to run towards action.

“We can help others change. The climate isn’t the only thing that’s going to change, we need to change too,” he said.