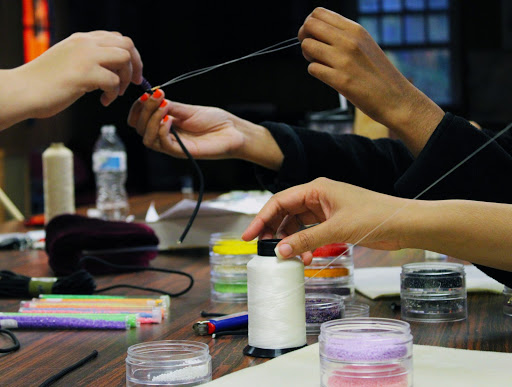 Students working together to bead a lanyard. (Brie Bristol )

Students working together to bead a lanyard.

Bead with me at the Josephine White Eagle Cultural Center

AMHERST – “The amount of times that I’ve pricked my finger doing this is huge,” said Angelina LaRotonda, a UMass Amherst junior and staff member of the Josephine White Eagle Cultural Center.

Every Thursday, for the past four years, the UMass Amherst JWECC awakens their inner creativity, and unwinds from academics by creating Native Art using modern beading work to create necklaces, earrings, rings and lanyards.

From 5 p.m. to 7 p.m. in Chadbourne Hall, any student is free to design any art that speaks to them using colorful beads provided by the center.

“A lot of people come and they’re interested in it because it looks nice, but they learn something about native people in the process,” said LaRotonda, who has been organizing the event for seven semesters. LaRotonda has been involved with the JWECC since her freshman year, with a goal to showcase to her fellow students that Native Americans, such as her, are still here.

“It’s such a common idea that native people aren’t around anymore,” said LaRotonda. She added that in high school, she was taught that Native Americans were erased and eradicated. However, with her beading, she plans to disregard this hypothesis and prove that they are still in the Amherst area.

While Native Americans who live in Amherst use beading as a way for traditional clothing to be distinctive from each tribe, carrying long-established lineage with each stitch, JWECC uses a different approach that allows students to relax while doing hands-on crafts.

“When you look at the traditional beaded projects, natives will use different colors because they use berries and natural things to dye their beads. The colors have significance in some areas, but with the modern beading that we do here, you can do any color that you want. We’re not strict anymore,” said LaRotonda.

Most students on campus are unaware of this ongoing event, however, alumni such as Kara Nye encourage students to take advantage of beading while supplies last.

Nye, a 2011 UMass alum, has continuously felt welcomed by the JWECC even before it was created by the Center for Multicultural Advancement and Student Success during her time at UMass. “I’m here more now than I was when I was a student,” she said.

She said that coming to the cultural center for beading inspires her to be confident in her creative art. “This is the first time that I have ever had success with crafting ever, so this event makes me feel really nice.”

Nye hopes that this event will continue to be a place where students can find the inspiration that she found. “Students need a place where they can come and relax and be successful but have a break that’s also connected to other people. They just need to do something where they can feel successful, that’s not stressful,” she said.

Beading with the JWECC will continue every Thursday until the end of the fall semester, ending on Dec. 5, 2019.