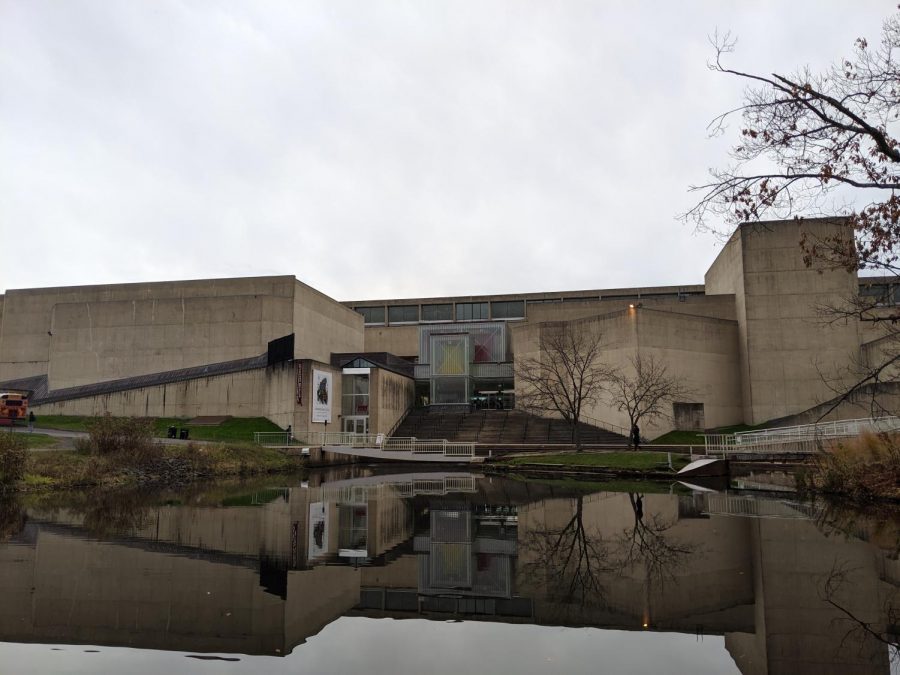 AMHERST — What kind of human being do you really want to be?

That was the question Harvard University Professor Cornel West left with the attendees of the “Criminalizing Dissent: The Attack on BDS and Pro-Palestinian Speech,” panel in the Fine Arts Center Concert Hall Tuesday evening. 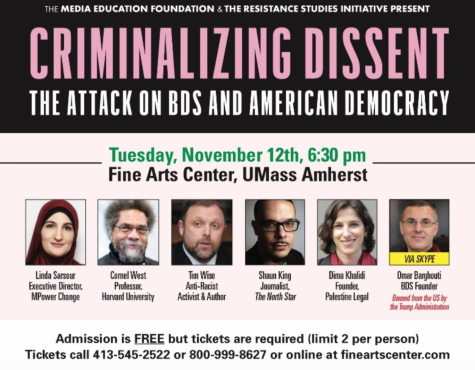 The activists of police brutality, race equality and human-rights came together to talk about the BDS movement and the lives and identities of Palestinians whose lives continue to be threatened by the Israeli government. The event was sponsored by the Media Education Foundation and the Resistance Studies Initiative Present. It was a follow-up to another controversial event held last May, “Not Backing Down: Israel, Free Speech and the Battle for Palestinian Right” that was prefaced with a failed lawsuit by three students who wanted the event moved off-campus, arguing the event was anti-Semitic.

The month leading up to the event was full of controversy, from both within and outside of UMass. Last month, Chancellor Kumble Subbaswamy released a statement about the panel, claiming the university was opposed to the BDS movement.

“It is troubling that such a one-dimensional, polarizing event should take place on our campus. A panel discussion where only one perspective is shared does little to increase the understanding of such a complex topic like the Israeli-Palestinian conflict,” he said. “Furthermore, because the BDS position, in general, fails to acknowledge the humanity on the Israeli side of the conflict and is considered by many as anti-Semitic, the upcoming event could very well alienate many of our Jewish students and other members of our campus community.”

The Chancellor’s statement did not go unaddressed.

Sut Jhally, UMass professor of Communication for over 35 years and executive director of Media Education Foundation (one of the event’s sponsors), said that the event’s primary focus shifted when it became clear that a conversation about free speech was needed.

Jhally spoke not only on the barred speech of Israel’s illegal occupation of Palestine and the stranglehold of Gaza but the attacks that can come with telling Palestinean stories, where advocates are immediately denounced and attacked as anti-Semitic. He said increasingly advocates of Palestine are criminalized. BDS Founder Barghouti was pointed to as an example as he skyped into the panel from Palestine, where it was almost 2 a.m., since he could no longer enter the United States after being banned by the Trump administration.

“I hope before you leave here today you realize what BDS is and more importantly what it is not, and why it terrifies defenders of Israel’s indefensible actions against Palestinian people,” he said at the event’s start. 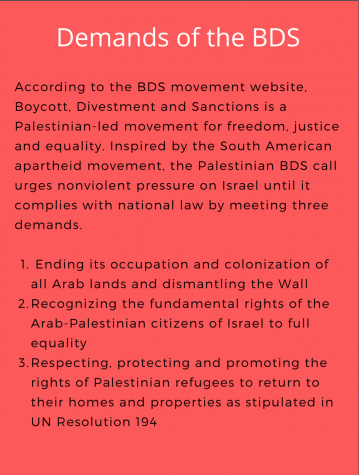 Jhally said pro-Palestinian speech has been barred within many powerful institutions, like congress, state legislators to the White House, but now is being fought on college campuses where administrators have a duty to promote academic freedom.

“When we announced that the event tonight would focus on the increasing attacks on pro-Palestinian speech and BDS in particular, we knew that it would be pushed back and we were prepared for the predictable attacks that came from the usual threat groups,” said Jhally. “We just did not think an attack would be internal and come from our own Chancellor.”

Multiple panelists including West and Sarsour also criticized Subbaswamy’s remarks about the event. Every panelist described their fights for Palestinians as their fight against human injustice and the duty they felt they had to stand up for that fight.

“The statement you wrote is in and of itself polarizing and does not recognize that Israel is engaging in illegal military occupation of Palestinians with large support from the United States, and now this institution’s complicity through silencing and controlling the narrative,” read the statement. At the end of the panel, students from SJP came to the stage to show their support.

“As you heard from our panelists and the intro video, the blatant attack and overt discrimination of people supporting Boycott, Divestments and Sanctions is the norm for our country. We can no longer let that be the case. Consider the fact that our money from our taxes goes to bolstering the apartheid regime of Israel. Now we are witnessing in real-time the displacement and destruction of people and their right to exist means that we can not be silent,” said Nathalie Amazan, senior political science and legal studies double major.

In addition to individual UMass Amherst professors and student groups, the Massachusetts Society of Professors, Jewish Voices for Peace among others supported the event.

At the same time as the BDS panel, UMass students hosted an “End Polarization, Promote Peace” event that encouraged all students to “affirm the value of dignity and respect for all, and to promote respectful discourse about the Israeli- Palestinian conflict aimed towards peace and understanding.” Their event included a peace walk from Kendrick Park to the Newman Center, followed by a community gathering conversation circle, co-existence table, Dare2Discuss, peace art, food and four speakers. 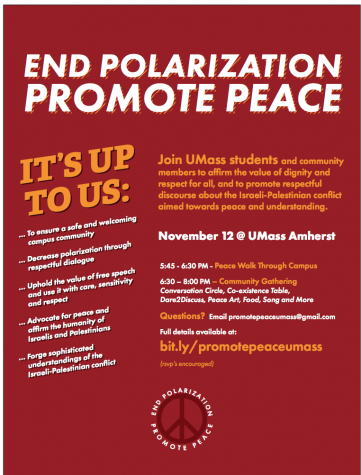 Tahlee Yichye, a senior communication disorders and sociology major, is a Jewish-Israeli and member of UMass Hillel. She estimated that a few hundred people came to the event where various booths were promoting open dialogue and conversation. One booth was handing out the book “Letters to My Palestinian Neighbor” that shows letters between an Israeli and Palestinian that work to communicate with one another about their feelings.

“There are people who are willing to talk and willing to have real conversations if you’re willing to come to the table,” said Yichye. “In general, BDS is very polarizing and a lot of the people who lead those campaigns can say things that are very anti-Semitic or anti-Israel, or frame them in ways that people who don’t have personal connections may not see it or may not understand where that is coming from. In general, things won’t get solved if two extremes stay in their extreme corner and yell at each other and scream at each other, and just chant or rant.”

UMass Hillel expressed their gratitude to the Chancellor in a statement.

“Recent anti-Israel events on campus have promoted dogmatic narratives and sentiment which convey a reductionist and dehumanizing portrait of Israel,” read the statement. “It is a reality that many Jewish students and other members of our campus community feel less safe to express their identity as a result of the tenor, scale and messages of these events.”

As a Jewish-Israeli student on campus, Yichye said that during events like the BDS one held, she feels as though she is not respected enough to say Israel should exist or that it should even be on a map.

She said it’s not about coming to a solution everyone is happy about and holding hands, but rather understanding and respecting other people’s points of view. She said she doesn’t believe that many people who support the movement are anti-Semitic, but rather leaders of the movement have a history of saying anti-Semitic statements that have initiated violent sentiment towards Jews and Israelis.

“That has to be an anti-Semitic underlying, even if that’s not the main purpose of the majority of the people there,” Yichye said.

Gazit Caya Nkosi is a 39-year-old Amherst community member and UMass alum who came to the BDS event with other members of an Anti-Zionist Shabbat Group they are apart of. The group heard about the event through Jewish Voice for Peace, a U.S. foreign policy based on peace, human rights and respect for international law.

“I’m Jewish but I’m also anti-Zionist. It is a really important part of being Jewish to me to ensure that all people everywhere have human rights. I feel like this particular area can be something that some folks in the Jewish community don’t want to address and acknowledge,” said Nkosi. “It’s really important for me to educate myself and support events like this.”

“As a Jew, I do not feel at all anti-Zionism is equivalent to anti-Semitism. They’re very different. Me being critical of the Israeli government and their stance on Palestine in no way lessens myself as a Jew. I think it is very harmful for him to make the statement equating the two because it just furthers all of the white-supremacist hatred we are experiencing right now in our country, in our world,” Nkosi said.

Nkosi statements resembled BDS panelist Tim Wise who spoke on his own faith, who was born into a Jewish family.

“I do not need your Chancellor and I do not need anyone else to tell me what anti-Semitism is,” Wise said.  He elaborated that a central component of his faith lies in inquiry and questioning those in power. He called on others in the community who have silenced themselves for too long.

“As Jews, we must be free to demand open inquiry, open debate, both for the sake of the Palestinian people and for the sake of ourselves, in the future of this country when it comes to politics and the globe. Human rights depend on that. As a Jew I implore you to not only support BDS but at the very least, to support the debate around this,” said Wise.

Each panelist spoke for about 15 minutes about the conflict and what drew them to the movement, followed by a discussion section with written questions from the crowd. Before the panel started, Co-Founder of Pink Floyd, Roger Waters, made a video appearance.

Near the end of the event, a man rose up and yelled into the crowd. Moderator Linda Sarsour later applauded him for being a “respectful heckler,” who let the panelists get through most of what they were saying before he interrupted.

“Free Palestine,” the crowd chanted to overcome his shouts.

Nural Hassan is a 27-year old Wheelock student who studies juvenile justice advocacy. She is Palestinian and came down for the event to hear many of the panelists that she admires.

“The BDS movement is extremely important because there are very limited ways in which Palestinians can actively make a difference with everything that’s going on. One of the biggest things Palestinians feel, at least myself as a Palestinian, very powerless and hopeless in a lot of these situations. The BDS movement is one way we, ourselves, can actually make an impact and difference,” said Hassan. “It is kind of the only way Palestinians can fight back and people who support Palestine can do it on a national level.”

Find out more about the Israel-Palestine conflict: