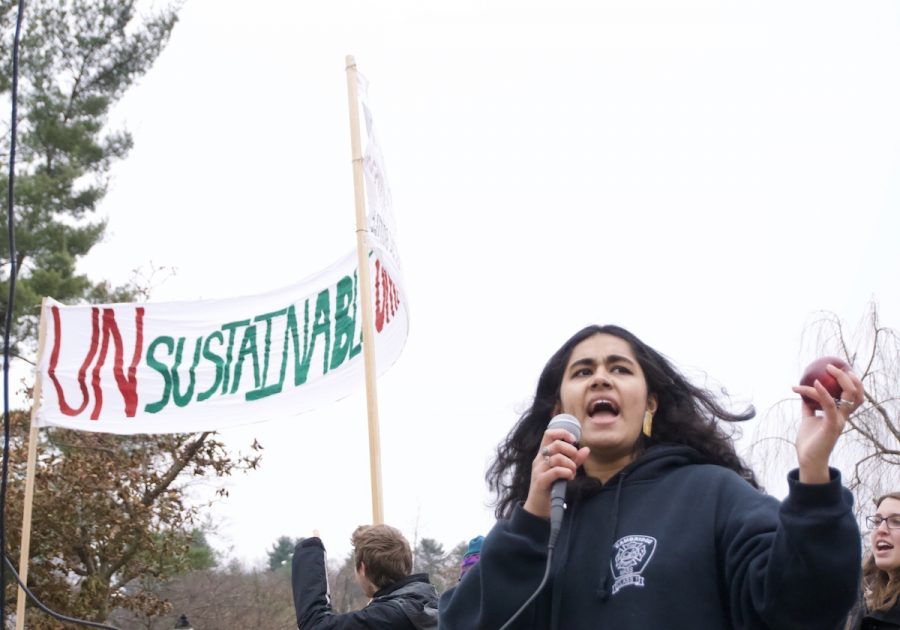 “I think the most vital fact that people need to remember is that we have a climate emergency,” said CEPA’s co-campaign coordinator, Barkha Bhandari, at a demonstration against UMass Amherst’s use of single-use, plastic bottles on Nov. 18, 2019. “The most marginalized and vulnerable communities in our society are being affected by the climate crisis a lot more adversely than we are right now.” (Brian Choquet/ Amherst Wire)

AMHERST —  “Dance party and fun for anyone who doesn’t want plastic bottles!” yelled one of the nearly 30 students who whirled and huddled outside of Whitmore Administration building in 37 degree weather early Monday morning at UMass Amherst.

The small crowd of bundled-up students – a mix of Center for Education Policy and Advocacy and UMass Sunrise Movement activists – were protesting for a ban of single-use plastics at the flagship. They came with bagels, hot chocolate and a petition with nearly 1,000 signatures that they presented to the Chancellor’s office after the demonstration.

According to Adam Lechowicz, one of the chief organizers of the event, UMass blows through an estimated 11,280,000 single-use plastic bottles each year. The calculation came from a recent waste sort conducted by the office of waste management that found the university generated a total of 234,172 pounds of single-use plastic bottle waste annually. With an average of 50 bottles per pound, student facilitators multiplied to get the alarming statistic. Nearly one-third of that was actually recycled.

“We’ve been having conversations with the administration about transitioning away from single-use plastic bottles, but those conversations have not gone anywhere,” said CEPA’s co-campaign coordinator, Barkha Bhandari. She points to UMass’ pouring rights contract with Coca-Cola as one of the primary reasons for the hesitancy. Under a pouring rights contract, universities are obliged to carry certain types of beverages and promote them a certain amount in exchange for funding – $6 million in UMass’ case.

In a letter sent out last semester, UMass Chancellor Subbaswamy stated that under Massachusetts law, the university cannot legally deny any company from bidding for a contract.

“Therefore we are unable to endorse or commit to not renewing the current vendor Coca Cola when the contract is next up for renewal,” Subbaswamy wrote in the letter.

However, campus administration has taken a number of steps to reduce single-use water bottles according to UMass spokesman, Edward Blaguszewski. In a statement, he said the university has taken one multiple ongoing initiatives such as implementing more hydration stations around campus and deploying four large hydration stations for all outdoor events.

“Additionally, the University has developed a guidebook for zero-waste events that we encourage all event organizers to download and use when planning any event. The College of Natural Sciences recently employed several of the guidelines when hosting its annual campus barbeque,” Blaguszewski said in an email.

Aside from Coke products, other beverage products have also come under flack in recent years. In 2017, UMass’ Student Government Association wrote a letter to the Chancellor’s Sustainability Advisory Committee against the distribution of UMass’ own branded single-use water bottles at large campus events.

Besides student voices, protesters flaunted a few hundred plastic bottles that they spent the past two months collecting.

“We have this art display because we want to show people in the university, including the administration and students how much waste this university is producing,” said Bhandari, who was one of the leading forces behind the event.

“We write to you in response to a direct violation of the values that the UMass campus community stands for. The university has been committed to creating a sustainable campus for a long time now and yet there have been several failures in the pursuit of this goal,” said Bhandari as she read a letter that was later delivered to Chancellor Subbaswamy.

“I think that we need to realize that this movement is a lot bigger than just this campus,” added Bhandari, “and that’s how I personally connect to this because I’m from India and I really want people to understand the connection between all these different things.”

According to a Guardian investigation from June, plastic waste from the U.S. commonly ends up in poor, developing counties across the globe.

The civil-disobedience demonstration was low-risk compared to other forms of student protest, yet demonstrators were prepared with two police liaisons, Student Government Association President Timothy Sullivan and Senator Adam Lechowicz.

“We’re essentially putting ourselves in the paths of most risk. On the one hand, because we are both white men and also the critical point is that we are the two contact points for police if they show up,” said Lechowicz. While a police car stood outside Whitmore, no officer tried to break up the demonstration.

Andrea Papa, the secretary of sustainability for the SGA, a green office fellow and organizer of CEPA’s food justice campaign, listed the climate concerns that would come from inaction: the absence of coral reefs, ecosystem eradication and increasing extreme weather patterns. She said that if a single plastic bottle is dumped into a landfill, it will take between 450 to 1000 years to degrade.

“We do not have that time to spare,” she said.“I think what is the most frustrating part of our current situation is that we have the resources, the information and the power to fix the problem and our legislators are not taking the necessary steps to fix what we broke.”

“Lack of leadership!” interrupted another protester.