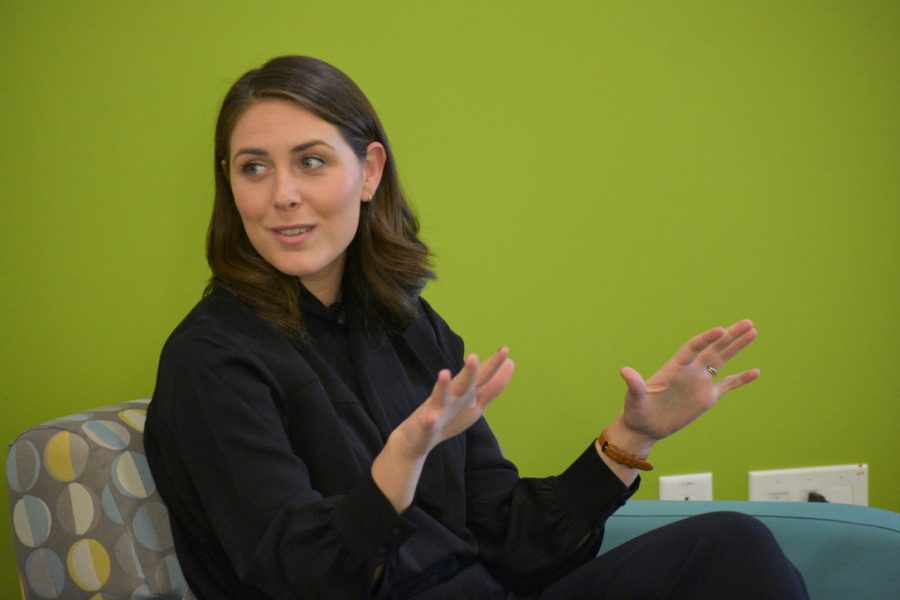 Kelsey Donohue’s journey to the White House began almost by chance. As a junior at Marist College, she was tasked to write a communications plan for a brand of her choosing. While her peers picked obvious ones like Nike or Colgate, Donohue went with something a little more iconic: Michelle Obama.

The project got her an A, but, three years later, it also helped the then 24-year-old land a job as the Former First Lady’s assistant press secretary.

“I found myself sitting in the First Lady’s office with the entire communications team for Mrs. Obama and them asking me the question of ‘Why you,’” said Donohue during a talk hosted by the UMass Journalism Department and UMass Public Relations Club. “When they asked me that question, I literally had in my bag five copies of the communications plan that I had drafted when I was a junior.”

The event, moderated by UMass professor Jennie Donohue, was held at 2:30 p.m. inside the Journalism Hub on Nov. 19. For one hour, a crowd of around 40 people listened as Donohue, who currently works as a communications director at Harvard University, gave advice on building a career in PR and spoke on her experiences working in the East Wing of the White House.

However, before discussing her career, Donohue admitted she originally never saw herself working in politics.

“Me finding my pathway into politics and public service and government was a lot of navigating the unknown,” she candidly said after discussing her upbringing in an artistic household. That didn’t sway her from her interests in education and government, which led her to work for the U.S. Department of Education.

“It was by no means a step by step process,” she added as she explained the importance of exploring your own interest in the field.

The conversation then slowly shifted towards Donohue’s time at the White House and her role in developing Michelle Obama’s public image during the final years of the Obama administration. Even years after her role ended, she still smiles back on her first day on the job.

“We were celebrating college admissions counselors and high school guidance counselor, and it was just this moment where I realized like, ‘I have found the perfect job,’ Donohue exclaimed. “Here I am at the White House talking about college access and supporting students to and through college.”

That excitement never ended either. Despite the long hours and daily chaos of working in the White House, it always found a way to be fun. One day Donohue could be camping out on the South Lawn with a girl scout troop and the next she’s donning a ballgown for a state dinner. The adventure of it all made her work-life comparable to the shenanigans of “Veep,” she described.

“I think every single day was like this balance of, ‘Oh my god, there’s so much going on… we’re trying not to let any balls drop,’” she said. “But also, we are having so much fun and that was the best part of the job.”

When people hear the title ‘press secretary,’ they may think of Sarah Sanders, but Donohue’s work with the First Lady was more light-hearted than the brash politics the White House is known for. Their goal was to peel “back the curtain” on 1600 Pennsylvania Ave. and find the best ways to reach their audience. This included a fair share of viral moments that helped provide a softer face to the most prominent political figures of the time.

One highlight discussed during the talk was Michelle Obama’s “Carpool Karaoke” performance with James Cordon. The appearance was to help showcase a song made to promote the First Lady’s “Let Girls Learn” initiative in 2016. Instead of a dry New York Times article, Donohue’s team wanted to find a fun way to reach their audience.

“When we explained this to Secret Service, we’re saying, ‘Okay, so you want the First Lady of the United States to get in a car with a foreigner with nobody else in the car with her?’ That’s actually a lot of barriers to jump!” Donohue explained. “[The show] had all these amazing really big ideas of them driving through all the streets of DC and… we had to say, ‘Thank you, but you’re going to actually have to drive around in circles on the South Lawn for about an hour.'”

The result was a youtube video with over 72 million views and a guest appearance by Missy Elliot.

While moments like these have a lot of pizazz, one of Donohue’s favorite posts was about this young military daughter Michelle Obama met through her military initiative. They featured the girl on social media and since then, they’ve been posting updates about her life every year.

“She was in eighth grade and the fact that we’ve continued to follow her and support and celebrate her is really incredible, and she’s now 19 years old at West Point [Military Academy],” said Donohue, whose husband was also in the military, in an interview after the talk.

These kinds of moments can show the power of social media and the importance it can play in a public official’s work, according to Donohue. Especially in the age of social media, she believes it’s essential for public servants to stay connected with their constituents through these platforms. And since her time at the White House, young politicians such as Alexandria Ocasio-Cortez have been praised for doing just that.

Near the end of her talk, Donohue took time to remind people that while the job was fun, there were still many struggles she faced. During her time at the White House, her dad passed away from cancer and her husband was deployed to Afganistan.

“These were some of those things where I was just trying to get through the days on a day-to-day basis,” said Donohue before stressing the importance of having a supportive work environment. She also stressed finding time to focus on self-care and taking a break from work.

In her closing statement, Donohue reiterated that it’s okay for students to be intimidated by the political world, but it’s important to take that leap if that’s where your passion lies.

“I think there’s so much reward in working in public service as a communications professional and working where every day I think about my bottom line is citizens, not just a customer,” she said.

Donohue’s encouraging message left attendees like junior political science major Denim Diaz inspired to find a career that intersects public service and public relations. In her major, Diaz sees many of her peers either going to law school or campaigning, but not the communications side of politics.

“Talks like this show that no matter what you major in, you can really do whatever work you truly want to,” said Diaz, who is now planning on joining the UMass PR club next semester.