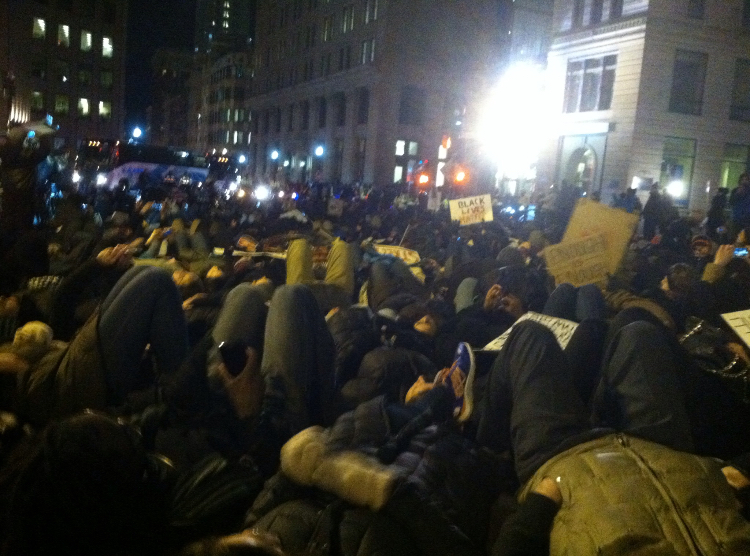 A Black Lives Matter protest in Boston after the video of Eric Garner surfaced.

While every decade has its own crusade, the past ten years launched society into a new era of social justice.

However, the most drastic change is how social media moved prophets, activists and journalists to become personalities on Facebook and Twitter. Social media activism has bled into the core of community advocacy. Whether it is sharing an Instagram story with unsettling statistics, retweeting campaign content or posting a viral video on Youtube, the new platform for change has connected the world like nothing before.

The campaign began with a twitter hashtag after the acquittal of George Zimmerman for shooting Trayvon Martin, a 17-year-old unarmed black teenager, in 2013. The campaign returned in 2014 when a video surfaced of the 43-year old father of six that was put in a chokehold by police officers, which then killed him after he was heard saying “I can’t breathe.” A month later Michael Brown, another unarmed, black teenager was shot by a white police officer in Ferguson, Missouri. Brown’s death sparked protests all around the country.

“There was an intergenerational connection, and both old and young people from all communities and cultures joined together for a common cause,” junior Vika Soni said about her experience at the BLM protest in Boston after the video of Eric Garner surfaced. “In order to break stereotypes and fulfill Martin Luther King Jr’s dream of a unified nation, it is essential to raise one’s voice and continue to peacefully protest wrongdoings.”

#MeToo Movement and Times Up

Despite gaining momentum within recent years, the Me Too movement began in 1997 when Tarana Burke heard about a sexual abuse experience of a 13-year-old girl. Following, Burke formed a nonprofit called Just Be Inc. that offers resources and support for sexual harassment survivors.

However, the campaign regained traction when the sexual-harassment allegations against Harvey Weinstein came into the spotlight. Alyssa Milano sparked the online hashtag with a single tweet, according to NBC News.

“If you’ve been sexually harassed or assaulted write ‘me too’ as a reply to this tweet,” she wrote. Within 24-hours, thousands of men and women had responded.

Women in the acting industry and in Hollywood, including Reese Witherspoon, Uma Therman and Jennifer Lawrence, stepped forward to admit their past harassment, causing an international impact on the awareness of workplace sexual harassment.

In the years following, the MeToo movement brought the actions of many powerful men to light, from heads of corporations, news and television producers to actors across the globe. According to a 2018 New York Times article, the movement brought down nearly 201 powerful men. Now, half of their job replacements are women. In a book published September of this year, “She Said” recounts two journalists investigation into the Harvey Weinstein sexual harassment story “that helped ignite a movement.”

An issue making its way to the forefront of social activism is the threat of climate change.

Greta Thunberg, a 16-year-old climate activist, first mobilized students to speak out against climate change when she skipped school for two weeks to protest outside the Swedish Parliament. According to Business Insider, she demanded that the Swedish Parliament cut emissions by 15% a year.

Thunberg’s civil disobedience was inspired by the March for Our Lives and National School Walkout held in America.

After she received attention through the media, Thunberg then called hundreds of college campuses and cities to hold a Youth Climate Strike on March 15, 2019, and again on Sept 20, 2019. The purpose of the protest was to send a message to world leaders for legislation that favors environmental protection. The strike also called many climate-justice organizations to follow-up with more demonstrations. These organizations are at the national level, such as the Sunrise Movement and Extinction Rebellion and also local level like MassPIRG. The groups come together to show an emerging community that continues to fight for environmental protection.

“We have no idea what’s going to happen with the Green New Deal,” said Sophia Nelson, a student activist and leader of the UMass Sunrise Movement chapter. “In Springfield, Richard Neal didn’t pull through and I don’t know if he ever will, but I know that Sen. Ed Markey supported us and I know that the other Sunrise groups supported us. If you get 200 people or so to dance and chant in the snow in 30-degree weather for two hours, you know they’re just as in it as you are, and you’re not alone in your fear or your dedication.”

The fight against climate change has a history of many developments before 2019, specifically involving the Dakota Access and Keystone XL pipelines and the Paris Climate Agreement. According to CNN, these oil ducts lie near Native American land and water supply and affect the Sioux tribe especially. The Keystone Pipeline leaked once in 2016 and once in 2017, inspiring protests and outrage on a national level.

The Paris Climate Agreement began in 2015 as a global initiative to cut greenhouse gas emissions. The accord includes 200 countries, each with their own proposal on how the country would cut pollution. When Barack Obama was in office, the US promised to cut emissions by 26% under the 2005 level within ten years, as mentioned by Business Insider. The Paris Agreement prevented any country from withdrawing its pledge for at least three years.

On Nov 5, 2019, President Trump pulled the U.S. out of the Paris Agreement, setting climate protection back. Yet, Thunberg was just announced as TIME’s person of the year.

The 2000s included major victories for the LGBTQ+ community. The long-fought 2015 Supreme Court Case Obergefell v. Hodges declared same-sex marriage legal under the Fourteenth Amendment. This repelled the Defense of Marriage Act that declared marriage as between one man and one woman.

The annual pride parade started after the Stonewall Riots in 1969, brings people from all around the globe to celebrate their identity and their right to love.

The event originally called the Christopher Street Liberation Day March, adopted the name Pride in the 1970s.  TeenVogue reported that the title originated from the gay activist organization called Personal Rights in Defense and Education (PRIDE). Since its founding, the Pride Parade has become an annual event that attracts millions of people to celebrate the LGBTQ+ community and continue to fight for civil rights. The event has become a social media movement, as rainbow pictures fill up Instagram feeds each June.

Media itself also has taken a stride with LGTBQ+ rights, as the representation of the LGBTQ+ community increased greatly in television. In 2018, 75 out of 857 characters on primetime shows were part of the LGBTQ+ community, according to GLAAD’s annual TV diversity report. The Verge reported that 2017 and 2016 also showed increases in representation, although movies are still struggling to catch-up.

With 2,316 mass shootings since Sandy Hook, as reported by Vox, gun control has been a major topic in the social justice debate. With gun violence affecting schools, concerts and places of worship, the debate between the rights guaranteed by the Second Amendment and the protection of the American public intensifies each time another shooting occurs.

In 2018, students reached a breaking point and took protests into their own hands after the fatal shooting at Stoneman Douglas High School in Parkland, Florida. Students from Parkland and all over the globe contributed their efforts to the organizations National School Walk Out and March For Our Lives.

According to a CNN article, the goal of the school walkout was to inspire Congress to ban assault weapons, increase background checks and prevent Americans with a history of violence from buying guns. There were 2,500 walkouts that spurred across the nation. According to Vox, the following March protest, March for Our Lives, was one of the biggest youth protests since the Vietnam War. 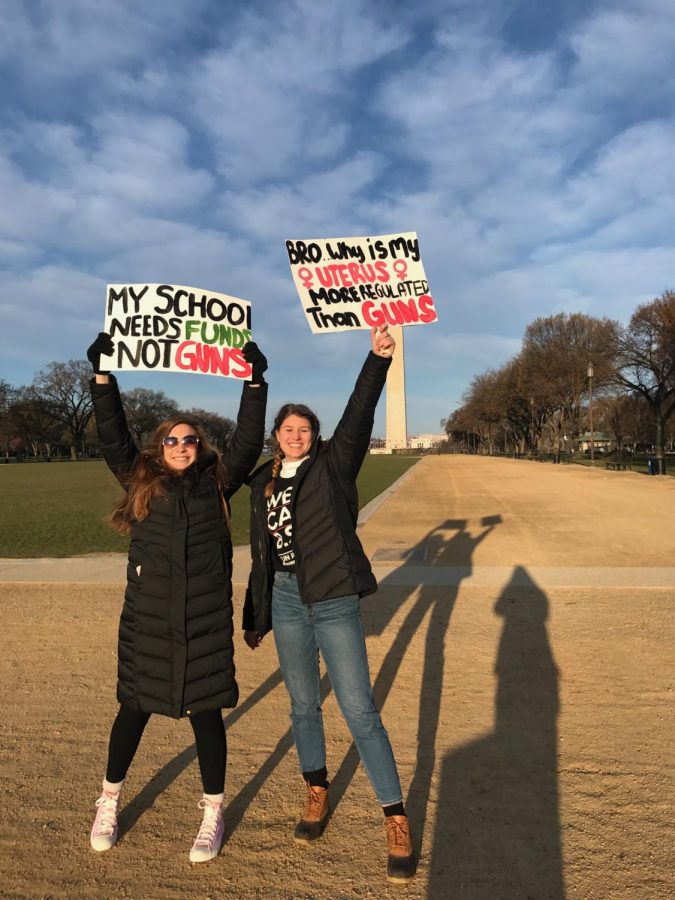 “The speakers, including Emma Gonzalez from Stoneman Douglas High School, made it clear that the reason we were there was not to have a free concert, or meet celebrities. We were there to publicly mourn and share in each other’s grief and rage,” Shiloh Bryant, a freshman journalism major who attended the March for Our Lives protest in Washington DC, said.

“The march created a new level of protest for the gun reform movement and made it clear that we were not letting the government have a moment to breathe because so many of our friends, siblings and brothers no longer were due to gun rights.”